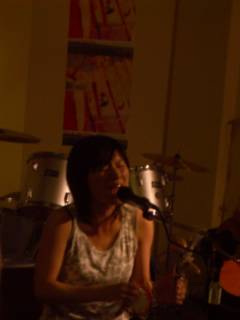 I have to confess, Japanese pop band Swinging Popsicle hadn't left much of an impression on me before I saw them in Seoul, even though I owned one of their albums and went to a show of theirs once in Tokyo.

That changed when I saw them perform during their Korea trip. They played two fantastic shows that I won't soon forget.

Singer Mineko Fujishima is the band's star, and the Korean audiences loved her. It isn't hard to see why. She is perkily cute and has an amusing double personality on stage: while performing, she's a soulful singer with a powerful voice, someone who becomes totally absorbed in the music and draws listeners into her world. But as soon as a song is done, she changes to something like a school girl, punching peace signs in the air and smiling broadly.

After each song, before the last note had even sounded, the crowds erupted in cheers and applause. When the band played the tune 'I just wanna kiss you' from their latest album, Transit, the crowd at the Kuchu Camp sang along to the chorus. Bassist Hironobu Hirata said that brought tears to his eyes, because he wrote the lyrics to the song. I understood why he was moved; these were strangers in another country singing along. 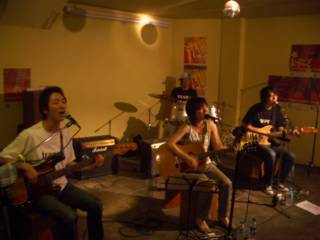 Swinging Popsicle at the Kuchu Camp.

The Korean audiences' ecstatic response to their music must have come as a happy surprise for Swinging Popsicle. Back in Tokyo, they play to fans who are much more reserved. Japanese rock music fans are like classical music fans sometimes. They may wait until the last note of a song has faded away, and even then might not move, waiting until the singer thanks the crowd to start clapping and cheering.

Not so for the Koreans: if they love a piece of music, they will let the musicians know, whatever point in the song the band is at. The Japanese musicians are flattered and energized by this.

For the Japanese crowds, I think group psychology is at work. No one wants to be the nail that sticks out of the board, because that nail will get whacked by a hammer, as a local saying goes -- the Japanese make a big effort to avoid sticking out in the crowd. That may be the reason why they try not to clap prematurely even at the conclusion of a rock song.

(I love Japan, but still, nothing is perfect, and the truth is that many Japanese are quite uptight in peculiar ways. I once got into an argument with a Japanese guy because he was unhappy that my friends were TALKING during a PUNK ROCK SHOW.)

I don't know enough about Korean people to explain the roots of their passion. But, and being aware that this may be a misguided cultural cliche, I do wonder whether food is a factor. Does not their fiery cuisine of hot peppers and garlic heat up their hearts? By contrast, the Japanese eat stuff like tofu and raw fish. Delicious too, true, but maybe not the most efficient fuel for passion?