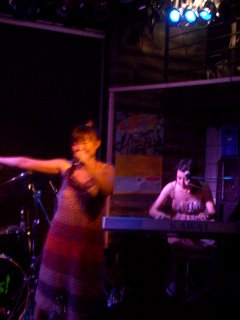 Orange Plankton’s show at Koenji Club Roots on Friday night, their first Tokyo performance in several months, made me think about how everything changes, how nothing stays the same. For the last few months the pop quartet was, musically, recharging their batteries: writing songs, practicing, trying out new things, without having to worry about gigs. At the Friday show, I could see that the rest period benefited them. They played a few new good songs (though I missed one because I arrived late), and bassist Tsuji was experimenting with playing a fretless bass and an acoustic guitar, giving more variety to the band’s sound.

What was more striking to me, and what caused me to think about how things change, is what I heard from the band members over drinks after the show. They said that each member now spends most of his or her time working on music alone, and they only meet to rehearse about once a week. Each is also doing more music away from the band: pianist Yuki playing as a guest performer for another band, for example, and singer Yumi writing and recording a song on her own for a TV program. Which isn’t anything unusual for an average band, but with Orange Plankton, it’s a change. I remembered when I first became friendly with the band members about two years ago, about the time I interviewed them, I was impressed to learn that they left free the hours between five in the evening to midnight every night for band related activities like practice and meetings. They were always together at night. Now they were more independent.

Another change, or more exactly, a possibility of change, is that it sounds like the band is on the verge of achieving bigger success. They have already done some songs for TV commercials, which help expose their music to a larger audience. Now there appears to be a possibility that they would release something on a major label. And what struck me most of all is that Yumi said there’s a chance the band might open a show at the Budokan! To put that in perspective, while the Budokan isn’t the biggest concert hall in Tokyo, it’s certainly the most prestigious. All big name musicians play there. I mean, the Beatles played the Budokan! For an indie band to tell you they will be performing at the Budokan is like having a friend who drives a Honda Civic tell you he’s buying a Bentley next.

It’s not clear if that show or the major label recording will come to pass, but I’m sure the band will give it their all to make those things happen, and I don’t know what they will do if they are unsuccessful. Theoretically, musicians can stay in an indie band forever, doing marginal jobs and playing at small venues, but I’m not sure if Orange Plankton would be happy with that. And, though usually I hate going to shows at huge halls like the Budokan, if it were Orange Plankton I’d be willing to line up at Pia in the morning like everyone to buy tickets, because they are great and deserve the success and it would be wonderful to see them at a place like that. Sure, unlike now, I probably wouldn’t be able to hang out with them after gigs, but at the least I’d be able to brag that I knew them when they were recording great indie albums in a small apartment. 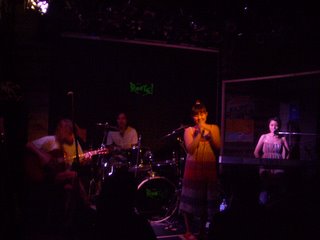 Orange Plankton, which plays gorgeous, somewhat jazzy piano pop, seems to often end up playing at extremely eclectic shows, with bands that are nothing like them. Once I saw them on the same bill as a sort of death rock/noise group. Another time they performed with an idol wannabe girl band that was an otaku magnet.

Tonight, after their show a break beat hiphop duo called Osaka Guerrilla Beatniks hit the stage. These guys have the most super-fantastic band name I’ve heard of in a long time, and they also did a memorable thing right before their last song. The rapper said before they finish, he’d like to read a poem. He then whipped out a copy of Kenji Miyazawa’s collected poems, and recited some Miyazawa verse. I was surprised because the poem was sort of Marxist in content: we will all become one and rise together, that sort of thing. Miyazawa is famous for his dream-like children’s tales, but considering the era in which he wrote (in the early 20th century), when Marxism was a major intellectual movement in Japan, and considering his poverty, I thought maybe it wasn’t surprising he wrote communist-sounding poems.

The rapper read this poem as his sidekick strummed beatnik like-notes on an electric bass. It made me wish I had on a beret and a black turtleneck, clicking my fingers to the verse. 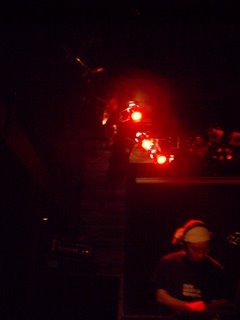 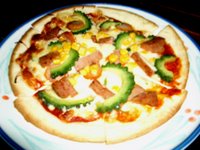 Foreigners, and especially Americans, often complain about Japanese pizza. Mayonnaise, chocolate and other foodstuff just do not belong on the top of a pizza pie, they say. I don’t care either way (and think some of the mayo pizzas aren’t bad), but I thought the pizza that was served at the after-show party would have horrified these pizza purists.

It was an “Okinawa”-style pizza. The toppings: corn; goya, or bitter melon, the bumpy green fruit that, as the name suggests, is very bitter; and that Okinawan favorite, spam! Was pretty good, actually.
Posted by Ken M - Japan Live at 11:29 PM