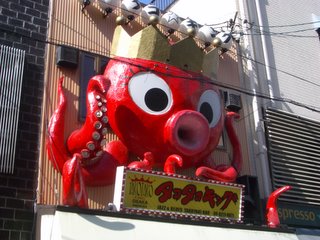 I’ve been wanting to visit Osaka for a while, so when Tokyo pop band advantage Lucy said they will go there on a one-band tour I decided to tag along.

Osaka, in my mind, is Japan’s number-two city. Yokohama is Japan’s second biggest city population-wise, but it’s right next to Tokyo and is basically just an extension of the giant metropolis. Osaka, on the other hand, has its own character and a long history as a merchant’s town.

Of course, Osaka locals might counter that it is their city and not Tokyo that is Japan’s top city, Tokyo being nothing but a heartless, upstart urban desert. And in truth, there are people out there that truly love Osaka and would never think of moving to Tokyo. I myself only had a few hours to spend in the city in between advantage Lucy’s show, and got just the smallest feel for what the appeal of this place is. I had time to make only the most feeble observations, such as: people stand on the right on escalators rather than on the left as Tokyoites do; many shops have huge, brightly-colored displays of sea creatures like octopus, squid, crab and poisonous blow fish on their facades; people walk fast and talk loudly; a female fashion fad is to wear boots with tiny, almost illegal-looking mini-skirts (this could be fashionable in Tokyo too, but I’m pretty sure I would have noticed if it is); and so on. 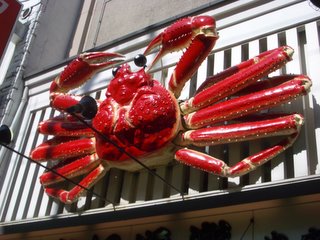 One other thing I noticed was that Osaka has great music audiences. The Lucy show was at a club called Live Square 2nd Line, which is located literally right below a railroad bridge, and I had about as much fun there as I’ve ever had at a Lucy show.

The thing that got me was the totally positive vibe of the audience, starting with the huge cheer that erupted when the show began, the non-stop dancing, and the general fun that everyone seemed to have. Tokyo crowds enjoy themselves too at Lucy shows, but they are more subdued in the way that they express their joy, possibly because they have more chances to see Lucy shows, and maybe also because Tokyoites are more self-conscious and shy because many of them are originally from regional prefectures. Whereas, people in Osaka grew up there and feel more sure of themselves, and feel fine with cheering if that’s what they feel like doing.

Whatever the reason was for the crowd’s abundant show of enthusiasm, it was a pleasure to be part of it. As in the Tokyo show I wrote about earlier, advantage Lucy played for more than two hours, doing both songs from their new album Echo Park and their older songs. One guy at the very front hopped in place energetically during all the faster songs. He’s apparently a legend among Osaka Lucy fans because he’s always at their shows, is always at the very front, and always does his hopping. (It reminded me of a video of an early advantage Lucy show I saw where about a dozen people in the front center sort of pogo-ed to the songs, like people used to do at the very beginning of punk rock. It was like some happy, peace-loving version of a mosh pit.) After the show, he came up to each Lucy member and shook hands, and didn’t let go of their hands for an extended period, like a person in some country where the handshake is something that takes a long time. 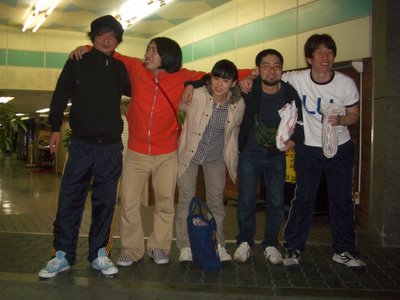 Every few minutes a train would pass right above and a rattling sound would fill the club, sometimes during the quieter songs. I didn’t mind it, but the band thought it was noisy and even lost their rhythm at one point because of it.

Harvey of OtsumamiMusic was also at the show, his first time seeing Lucy live, and has written a very nice report on it. Check it out!

Both the Tokyo and Osaka shows had lively, happy crowds, but several sources, including my friend Dr. I, have told me that the most impassioned advantage Lucy fans during this three-city tour were at the show in Nagoya. The crowd asked for and got three encores from the band, and at the end the band and audience kept on saying ‘thank you’ to each other over and over again. I wish I could have seen it.

After the Osaka show I went out with the band to a place that served delicious raw chicken (you can only eat it raw if it’s as fresh as can be), and there the musicians said again that they wished the tour wasn’t over and that they could do more shows. Earlier, singer Aiko had repeatedly said that on stage too. As a fan I shared their wish.
Posted by Ken M - Japan Live at 2:50 PM