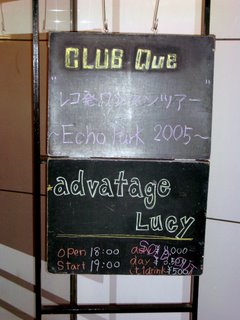 Woops... Club Que didn't quite get the name of the band right on the signboard.

But other than that, it was a nearly flawless show for advantage Lucy at the Que Sunday night.

The show was what Japanese music fans call a 'one-man live', just one band for the night rather than several. Since it was the Tokyo pop group's first 'one-man' in four years, and most fans prefer to see their favorite band alone rather than with other bands, the club was packed. The show was sold out, in fact--about 300 people were crowded together in the basement club.

I felt breathless standing there for about an hour before the show, with little space to move, not wanting to accidentally elbow the people around me, thirsty, unsure if I'd be able to make it through two-plus hours of the performance. (This may sound crazy if you've never been to one of these events, but you can start feeling territorial about where you are standing--once you stake out your ideal spot with a good view of the stage, you want to stay put, and not go to the bar or the bathroom or go talk to a friend, any of which will almost certainly cause you to lose your place. Then you might get stuck behind a pillar with no view of the stage, next to the bathroom, behind a really tall guy or a person with big hair, etc. So I stayed at my spot, as did everyone else.)

It was also an overcast, chilly day in Tokyo, and all day I had been in a gray mood.

But once the show started, my discomfort and gloominess vanished. I'm not so much of an advantage Lucy kook that I think their shows have therapeutic value, but nevertheless the fact is that I suddenly felt great. The packed crowd around me at times disappeared from my mind and then reemerged as groups of happy people with good vibes. Clearly the audience was happy to be at the Lucy show, and the happiness was infectious and I felt about as good as I've ever felt.

The band played more than twenty songs, over two hours of music with no break, both songs from the new album Echo Park and many of their classic tunes like "Citrus" and "Armond" and "Memai" (sometimes I'd notice a couple or friends in the audience look at each other with contentment when the intro to a song they both loved began).

What a great autumn this has been this year because of the arrival of Echo Park!

Lucy singer Aiko suggested there was more to look forward to next year--she said the band will try to finish another album in 2006. Well, it was quite a wait for Echo Park so I'm not holding my breath, but it would of course be a wonderful thing if we're treated to more advantage Lucy so soon.
Posted by Ken M - Japan Live at 5:54 AM