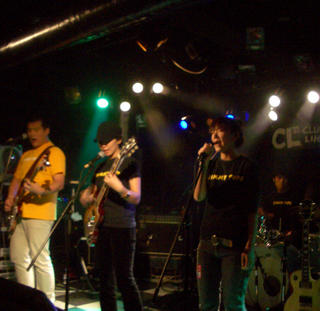 Leaning on the wall inside the Koenji Club Liner waiting for the Jimmy Pops show to begin, I felt a shaking.

An earthquake? Or was this my body’s way of telling me I should cut back on my alcohol intake? For a few moments I wasn’t sure, but then I saw the Club Liner signboard on the stage swaying, and heard the girls behind me in the audience say, ‘this is a long quake’, and figured out it was the earth and not me that was doing the trembling.

But then I got to thinking about a nightmare scenario—what if the Big One hit Tokyo while I was at a club watching a rock show? The dingy buildings that house rock clubs in this city hardly look quake-proof. Since I go to shows at least once a week in evenings, if my luck is bad I could very well be buried alive in a live house with the bands and their fans. Would people then say that my end came doing a job—trying to spread the word about great Japanese indie pop and rock bands?

Those few seconds of delusional pondering soon passed, and I became excited again about seeing the band I’d come to see, Jimmy Pops. I’d heard this band’s songs in the great K.O.G.A. Records compilation album Good Girls Don’t, and had wanted for a while to catch them live. Like a lot of groups affiliated with K.O.G.A., Jimmy Pops is what might be called a gyaru rock band (gyaru being the Japanese rendition of ‘gal’), playing catchy pop tunes mixed with some alternative rock and just a sprinkle of punk. And as with other such bands, the main vocalist is female and sings in a girlish, high-pitched voice. They play a lovely, ultra-catchy tune called “Michelle” in Good Girls Don’t (which is a compilation anyone who has a taste for this sort of music should try to get their hands on), and their new album Jimmy Pops' Minyalbum, is growing on me.

Jimmy Pops only plays live once in a blue moon, and for one reason or another I missed their last couple of shows, but tonight I was determined to see them. They looked about the way imagined them. On the right and left of the stage were the lead guitar and bass, two huge guys—judo heavyweight big—and between them were two petite girls, the singer and the rhythm guitarist, and in the back was the guy drummer. They all wore blue and yellow Jimmy Pops T-shirts.

Their show was bubbly, unserious, and amateurish, but in a lovable way (one of the songs featured two false starts—neither of them scripted). It was as if they were playing for friends in someone’s living room, and, in fact, between songs, the singer sang "Happy Birthday" to a pal in the audience. But the light-hearted performance was never annoying, because the band was having a great time and their happiness was infectious, and besides, the music and their playing were both good.

For their finale they played a cover of the Pixies’ “Debaser”, and while the huge bass guy tried to be as over the top as Black Francis, the girl singer also attempted being an intense Pixie but she got the giggles listening to the bass and didn’t quite pull it off. I would have never imagined, though, when I bought the Pixies album when it came out, that one day I’d be listening to a cover of it at a tiny club across the Pacific in Tokyo in 2005, and I loved watching Jimmy Pops going at it.

A duo playing acoustic guitars was also good tonight. They were members of a band called Tsurezure Shokudo. The singer had a fine tenor voice, and the lead guitar was amazing, casually running through difficult sounding jazz parts. They’re worth checking out.

The Club Liner’s schedule said that private parts-exposing singer-led punk band Ging Nang Boyz will be playing there this Sunday, but the show is sold out. Well, of course! The live house is tiny. Maybe 150 people can be packed in there at most, but it will be uncomfortable. In fact, it will probably be hellish. I almost wish I could go to the show just to say I was there, like the Spaniards must say, yes, I was one of the guys who was chased by the bulls at the carnival.
Posted by Ken M - Japan Live at 7:50 AM