The Kitchen Gorilla At Zher The Zoo 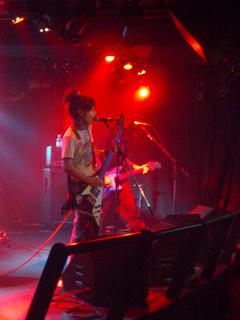 I was so excited by The Kitchen Gorilla’s show tonight that I got on the wrong train home. But I was in such a good mood it didn’t matter. I walked through Harajuku, and passed about half a dozen white model girls, thin and small-faced like cheetahs.

It was my second time seeing the Japanese pop/rock trio, and unlike the first time, I was familiar with all their songs from their mini-albums One and Skirt, and had become a major fan. They were playing again at the Yoyogi Zher The Zoo.

I love the way this band looks on stage. The guitarist is always expressionless, and vaguely resembles Lee Ranaldo in a young Japanese way. He wears a padlock necklace like Sid Vicious (Sid’s “My Way” played as the band walked on stage). The female drummer, on the other hand, is all smiles as she pounds and batters the drums. And then there’s the singer, Kayo, who is a fashion explosion. Tonight she was wearing big diamond-shaped earrings, white cowboy boots, a sequined and skull-shaped pouch, and was playing a black Flying V bass.

On stage, Kayo is a magnet for eyes. She sways like a snake charmer’s cobra. She sings as if she doesn’t ever want to let go of the mike—it’s like a tether that keeps her from being blown away by the force of the music. The girl has 100% confidence.

Yet, at the end of a show that left me feeling woozy, she rushed over to the merchandise table to collect questionnaires, like any old indie band member in Tokyo. I don’t understand why The Kitchen Gorilla aren’t already big stars.

The band, by the way, has announced it will release a new album called my voice in December.
Posted by Ken M - Japan Live at 8:23 AM