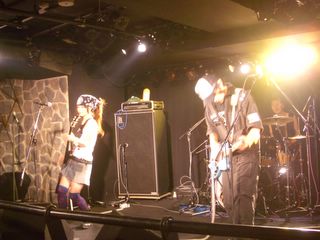 Kitchen Gorilla at the Zher The Zoo.

TOKYO--Three rock musicians calling themselves THE KITCHEN GORILLA Thursday night took over the Zher the Zoo club in Yoyogi, Tokyo. The group consisted of a female vocalist/bassist, a female drummer and a quiet male guitarist. Witnesses said the three used punk rock to take the audience hostage.

No, but seriously... "Kitchen Gorilla"! What an awesome name for a rock band!

I knew about The Kitchen Gorilla because in a compilation album I'd listened to a song of theirs called "O.K.", in which the singer chants "O.K." about a hundred times. It's a nice pop punk tune, and I wanted to see what the band behind the song was like.

They were wild. They personified post-modernism, without maybe intending it. The music was heavy pop punk, but the singer sang in a squeaky high voice. She was dressed like a rock rebel, bundling her hair in a black bandana, but between songs took sips from a Miffy water bottle (I think... Miffy being the rabbit version of Hello Kitty).

The Kitchen Gorilla were a friendly bunch, and after the show I bought their new mini-album and chatted briefly with them, but forgot to ask how they got their name. Next time!
Posted by Ken M - Japan Live at 9:10 AM