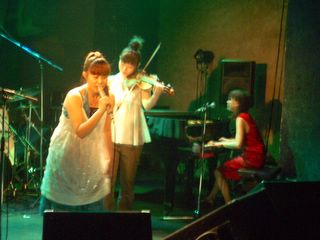 Music academy grads who had gone bad took over Star Pine’s Café in Kichijoji Tuesday night. They carted a grand piano onto the club’s stage, but instead of playing the classical music of their training, they used it to create loud pop.

The first music academician-gone-bad to appear on stage was pianist Yuki of Orange Plankton, gorgeous in a red dress. As she played, a little girl in a white dress walked on stage and started to recite lines to introduce the first song. Then, from somewhere unseen, singer Yumi’s voice joined the girl’s, the two taking turns making the introduction.

Yumi soon came on and sang, while the girl remained on stage, looking a little confused. It was good stage direction—the hundreds of bands I’ve seen have tried in myriad ways to catch the audience’s attention but never before had I seen a child used to help out with that task. (I found out later that the girl is a member of a junior drama troupe. In some countries like the U.S., the kids might not even be allowed in a club like Star Pine’s that serves alcohol.)

Tonight there was more depth to Yuki’s sound because of the grand piano she played rather than the usual keyboard. Another delinquent music academician, a female violinist, joined the band toward the end of the set. A connection was made between the violinist and Yuki the pianist: when the two looked up at each other during a fiery exchange, the intensity of their expressions caused a pleasant chill to run through my spine.

The whole band was intense. As they moved excitedly on stage, it felt like it wasn’t only them, but also the air around them that was spinning.

At the end of the set, the little girl returned to the stage holding a little blue bird (the subject of one of Orange Plankton’s songs). She tossed the bird into the air so it could fly, but because of the darkness and the bird’s blindness at night, it fluttered pitifully to the ground.

Orange Plankton, however, had really soared. 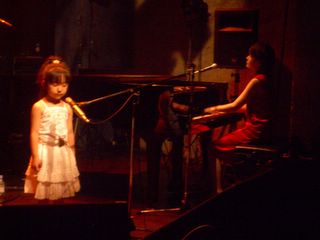 The next band, Edreport, was connected through the network of classically-trained-musicians-gone-bad: its bassist went to the same music school as Yuki. It also happened he was a friend of the drummer of the late-great pop band Judy & Mary, Kohta Igarashi, who played drums for them tonight.

I was excited to see a former Judy & Mary. There was a period when I was deep into the band (like many in Japan!) and I still like them. And now here was their ex-drummer, who played for them at huge arena shows. When Igarashi talked between songs, he had the same relaxed irreverence as Takuya, Judy & Mary’s guitarist, who plays now in a band called Robots that I saw perform recently at the Que.

Backed by Igarashi’s skilled drumming, Edreport, consisting of a pianist, bassist and the same female violinist that played with Orange Plankton, played a good set. They sounded modern jazz at times, Japanese pop at others, and they also had classical music moments. They weren’t performing Mozart and Mahler, but the sound that they molded out of different musical genres was such a pleasing product that it seemed any real music lover would enjoy it.
Posted by Ken M - Japan Live at 7:26 AM