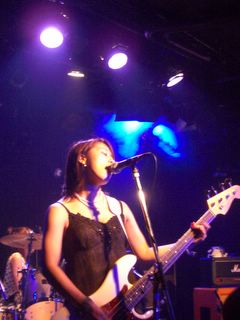 Chiharu of the Clicks.

One step inside Shimokitazawa’s Club Que tonight, and I knew I was in K.O.G.A. Records territory. Blasting from the speakers were songs by great pop-punk-rock bands that have recorded with the Tokyo indies label, like Mix Market, Jimmy Pops and the Automatics. I recognized a big portion of the songs playing, a testament to how good K.O.G.A. bands are and how much my collection of the label’s CDs has grown. Tonight at the Que was a show featuring some of those bands.

Mr. Koga, the bleached-blond owner of the record label, is one of the true characters of Shimokitazawa. A staid businessman by day, by night he is a rock aficionado who prowls the town’s alleys, the shochu liquor of his native Kyushu pumping through his blood vessels as he drops in on clubs like the Shelter, sometimes causing a scene in his drunken state. Or so people tell me. I see him everywhere but have never talked to him. All I know for sure is that he has excellent taste in music, judging by the bands in the K.O.G.A. catalogue.

One of the latest additions to the K.O.G.A. label is the Clicks, a girl rock trio, who headlined the Que show for the final night of the tour after the release of their outstanding second album, Magic of White. Opening for them were Nudge ‘em All and Ron Ron Clou, two K.O.G.A. Records veteran bands, as well as a band I’d never heard of called the Dudoos.

If their fashion was weird, their music was spot on. Their playing was crisp, precise and energetic, and all of the audience seemed to be having a blast. Unfortunately, they announced the unhappy news in the middle of the show that they would be taking a break from the band thing for a while. I wished I’d known about them earlier. 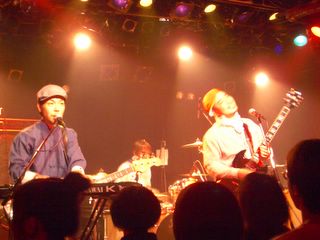 The Dudoos at the Que.

The Clicks played one of the longest sets I’ve seen them do, mostly doing songs from Magic of White. They’re still a developing live band, especially compared with veterans like the Dudoos and Ron Ron Clou (if you add the female singer Momoko Yoshino to the trio Ron Ron Clou, by the way, you get the Automatics), but they had exciting moments, especially when they played the title track from Magic of White and a couple of other numbers from the album.

Besides, they were all wearing frilly dresses and high-heels while pounding out driving rock tunes, and I have a major weakness for that sort of strange contrast. 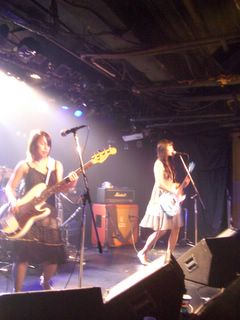 The Clicks at the Que.