Two CDs by little-known but great Japanese indies rock bands, both with animals in their names: 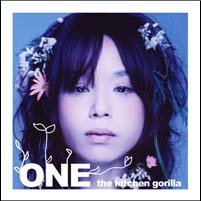 The Kitchen Gorilla's One

One took me by surprise. I expected the Kitchen Gorilla to be a pop-punk band (by which I mean, the sound is light punk but the fans don’t sport mohawks and don’t slam-dance) after listening to their song “O.K.” from a compilation and after watching their intense, loud show at the Zher the Zoo. But this mini-album reveals them to be more practitioners of straightforward, satisfying J-Rock, a garage Judy & Mary. Vocalist Kayo, pictured on the cover looking pale with flowers in her hair (some sort of funereal reference? One of the songs ends with her mumbling: “Please kill me”), has a voice that is high up in the scale of Japanese female squeakiness and she uses it to sing in a coquettish way. One can be bought here on Amazon Japan, but it looks like it’s not always stocked.

A stylish band that mixes funk and R&B, jazz, and pop sounds, Travelling Panda is one of my current J-pop faves because of the singing style of its vocalist, Yoko Furukawa. Her style is relaxed and effortless-sounding like a bossa nova singer’s, and also natural, like that of an ordinary Japanese woman going through a typical day. I’m enchanted by it. Skip! is a good five-song intro to their sound. Song samples can be found here, and it can be purchased here. Ghost in the Salon, their second album, is also outstanding.
Posted by Ken M - Japan Live at 6:37 AM