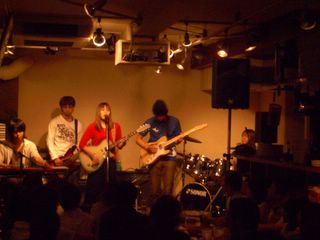 Playing tonight at the Mona Records café in Shimokitazawa was Murmur, a one-girl pop music unit whose debut mini-album Good grief! I enjoy a lot. Murmur was opening for Gomes The Hitman, a popular Tokyo guitar pop band.

Mai Tsuyutani, who is Murmur, started the set about half past seven. A 20-year old girl from western Japan who wears her silky hair long, Tsuyutani still seemed to be getting used to performing and was a little stiff on stage, but she had charm and the songs she played were good.

As Japanese bands often do, between songs she thanked the main act, Gomes The Hitman, for inviting her, and said she was glad to open for them.

“I’ve liked Gomes The Hitman since I was in intermediate school,” she told the audience. “I’ve liked them ever since a friend of mine gave me a tape of neo-acoustic musicians. It contained Flipper’s (Guitar), (advantage) Lucy and Gomes The Hitman. So I’m happy tonight.”

Tsuyutani is just getting started and probably needs to do many more shows before she could really draw the audience in with her playing. But I felt a certain sense of thrill watching her unit, Murmur—it made me think maybe it was like this when bands like Gomes and Lucy were rookies many years ago, at the start when everything was completely fresh, and there was a lot of uncertainty and bumpiness, but plenty of excitement too. 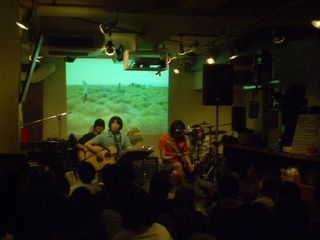 Gomes The Hitman at Mona Records.

Gomes The Hitman, a group that’s been around for more than a decade, is led by the singer and guitarist Toshiaki Yamada. He has a mellow tenor voice, a voice like smooth calvados. Yamada’s singing and the elegant love songs he writes seem to have made the band popular with women—most of the audience were females in their late 20’s and up. Throughout the show a video was playing at the back of the stage that showed Yamada wandering around in what looked like the Nevada desert, wearing on his head a pillow with horns and two big circles for eyes. It was strange. He called that character the Cat.

This was yet another show in which the band Plectrum’s excellent lead guitarist, Akira Fujita, a.k.a. Akky, was helping out by playing guitar. He’s in high demand as a support guitarist (he’s worked with Chara and Syrup 16g, among others), and I see him all over the place.

All in all a nice show. But because the show was sold out, the café was crowded and I was stuck against the back wall. I was afraid I might get Economy Class Syndrome. Café shows are supposed to be more relaxed and comfortable than those at ‘live houses’, but I’ve found that when it’s a popular musician’s café show the space becomes even more cramped than at live houses because of all the tables and chairs.
Posted by Ken M - Japan Live at 5:00 PM