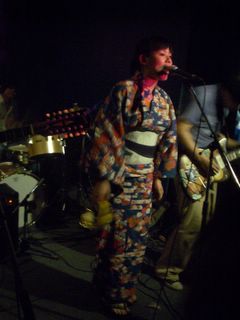 I’ve bought advantage Lucy’s new E.P. and the first lines of the first song keep on running through my head. They go,

Omoidasunda [I remember]
Ano kaze, ano hizashi [that wind, that sunlight]
Wasureyoutoshitatte [even if I try to forget]
Sobani iru [They are near me]

A slightly different mix of this song, “Glider”, has already been released in a soundtrack, and I wrote about it before, but listening to it again I’m reminded what a powerful song it is. Aiko, Lucy’s singer, is one of the great poets of Japan’s indies music scene, something that becomes clear, I think, when you listen to the lyrics in Japanese.

The second song on the E.P., “Hello Again”, is one of those simple Lucy pop songs with a nice melody that gets in your blood before you know it. I’ll be watching to see when the infection gets serious.

The third tune, “Smile”, is a dreamy little gem of a song for voice, guitar and keyboard. The reason I’m thanked in the CD booklet is that I checked the English lyrics for this song (they were actually perfect when I got them).

The final song is a live recording of “Chikyu” at the Club Que, and it sounds great.

Advantage Lucy’s first single in three years… It’s a major musical event, and I know I’ll be immersed in these songs for a while. I have a few extra copies of the CD—please e-mail me if you want to check it out. [UPDATE: Sorry, I've now run out of the extra CDs, though I might get some more in a few weeks.]

I bought “Hello Again E.P.” at an event organized by Miniskirt’s Edgar at a Shibuya club called Aoi Heya (meaning Blue Room), which is owned by a veteran Japanese chanson songstress. It had purple walls, plastic vines, Grecian busts.

In the audience were two sorts of people: those who had come to listen to advantage Lucy, and those who were there to dance to the D.J. music and the music of all the other bands, including Aprils. Although both like live music, they have different dispositions and don’t always mix well. I think of them as the Live House Faction and the Club Faction. The former, of which I consider myself a member, goes to shows chiefly to listen to music, though dancing is an option. The latter attends shows to have fun and dance, though they also no doubt enjoy the music.

Maybe that’s an oversimplification, but the crowd did seem divided neatly in two, between the dancers and the squares.

There was no raised stage at the club, making it difficult to see the performers in the back, but I was able to get to the very front, facing one of the speakers, to take a photo of Lucy’s Aiko wearing a yukata, a summer kimono. 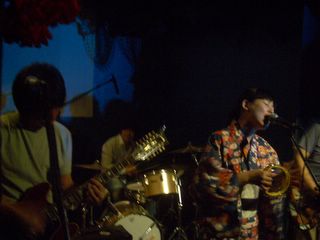 Advantage Lucy at the Aoi Heya.