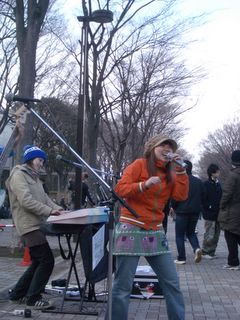 Orange Plankton in Shibuya, in front of NHK.

In front of the NHK television studio in Shibuya is a pathway where on weekends, garage rock groups, interpretative dancers, comedians and others come to perform for strollers, each group occupying a small patch of the sidewalk . It’s noisy and colorful, like an impromptu carnival. Tokyo pop band Orange Plankton has been playing here for free on recent Sunday afternoons, and I went to check them out.

The spontaneous weekend gathering of performers in Shibuya is a tradition going back at least two decades. When I first came to Japan I didn’t think much of these often exhibitionistic but incompetent performances, but then one night in the mid-90's I went to see Fugazi play at the Ebisu Guilty, and one of the members of Fugazi said something on stage that made me look at these street bands in a different light. At the time, authorities had prohibited the playing of amplified music in the area, and so the gatherings had disappeared. The Fugazi guy (memory fails on which one it was) asked on stage, what happened to all those bands that used to play on the street in Shibuya, it was so exhilarating to see so many bands playing in one place. That’s when I realized, yeah, many of these bands might be little more than noise pollution, but still it’s a great thing to form a band and create music, and try out your music with the public. 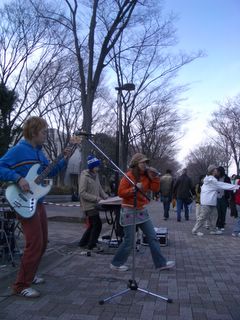 Another picture of Orange Plankton in Shibuya.

In the years since, the police have cracked down on the performances every once a while but recently have been turning a blind eye, or more accurately, a deaf ear to the street gigs as long as the amps aren’t turned up too loudly. So Orange Plankton along with other bands have been playing here.

Despite it being mid-March it was a cold Sunday afternoon and on the way to Shibuya, snow as big as ashes started to fall from the sky. Orange Plankton was there in front of NHK (they had done their first show of the day in the snow!), and soon began a set of about half an hour. The amps were turned down low to avoid getting in trouble with the cops. To one side of the band was a jazz group, and across from them was a wannabe girl-idol punk band, and because everyone was playing at once it was hard to hear the songs. But when I focused I could hear their familiar songs, like sifting for gold in a sandy river of noise.

I only listened to one set but they did several more later in the day, and I wished I could see those too. In Orange Plankton’s BBS, I read that one guy took the bullet train from Nagano prefecture just to see them play, then went to the airport to catch a flight to Fukuoka where he actually lives (!). If you are in Shibuya on a Sunday and see these musicians, stop and give them a listen. That will make their day.

AT NIGHT advantage Lucy played at the Que in Shimokitazawa at an event also featuring a solo artist named Kawakami Jiro (formerly of a band called Kusu Kusu) and a band called the Robots (led by the ex-guitarist of Judy & Mary, Takuya). Those are three popular musical units, and the Que was packed.

It was a strange night. Kawakami plays R&B-type songs, the Robots soft punk, advantage Lucy does guitar pop, and the fans of each artist didn’t mix at all with the other two’s fans. During the show of, say, Kawakami, the Robots and Lucy fans by and large seemed indifferent or bored.

Advantage Lucy did the show because they thought it would be a good chance to introduce themselves to music fans who aren’t familiar with their music, and they played a lot of their oldies like ‘Goodbye’, ‘Kaze ni Azukete’ and ‘Metro’. They played beautifully, though guitar pop just isn’t as flashy as R&B or hard rock, and I wondered whether they were able to convert many of the musically benighted to Lucy fandom. For my part I was knocked out by a new ballad of theirs called ‘Time After Time’, but being surrounded by weird Robots and Kawakami fans helped me keep my emotions in check.

The Robots played last, and I was much more excited about them and had much more fun than I thought it would. Part of it is that I used to be a huge Judy & Mary fan, buying all their CDs etc. (and I still like them), and here was Takuya the guitarist in a small club rather than the humongous halls he used to play in with JAM. Plus the Robots really rocked. Takuya performed with skill and total confidence in himself bordering on the cocky, like a rocking Che Guevara.

I’d heard that as a kid Takuya was a juvenile delinquent that was kicked out of the worst high school in town (don’t know this for a fact though), a true ‘yankee’, the bizarre term the Japanese give to bad kids (maybe because the kids often bleach their hair to make themselves blond?). And he had the attributes of a ‘yankee’: bleached blond hair; triangular eyes that stared with attitude; sunken cheeks; a Sid Vicious snarl. But he would also often flash a boyish smile, which along with his good looks and rough charm may have partly explained the large number of girl fans in the audience, despite his frequently saying very inappropriate things on stage (he was, for example, talking about the snow earlier in the day, and when some in the audience questioned whether it was true it snowed, he said yes it did in Tokyo, but maybe you wouldn’t know it if you trained in from the sticks to see the show. He also made a joke about, er, unwanted pregnancy...).

It was a raw, rocking show that reminded me that Judy & Mary, despite the cuteness of Yuki’s singing voice and the pop rock arrangement of many of their songs, was a band that had its roots in punk rock (though maybe a pop Japanese version of punk). 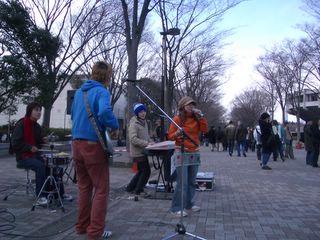