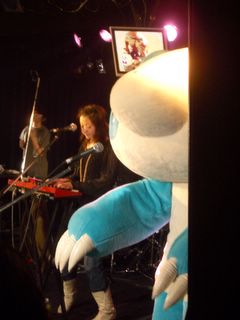 Guitar pop was the theme tonight at the Shibuya O-Nest, where four good bands played: Lost in Found, winnie, Aprils and Spaghetti Vabune.

I was especially looking forward to seeing winnie, who only recently started perfoming live after a one-year hiatus. Their mini-album released 2003, first class speed of light, is one of my favorite recent Japanese pop-rock albums. I included it in my list of 5 Dreamy, Distortion-Heavy Japan Rock CDs, of Japanese groups that are musical descendants of My Bloody Valentine. Looking at winnie's website, it looks like the band members are more into pop and rock bands like Teenage Fanclub, Wannadies and Ivy than My Bloody Valentine, but I still do hear a little of MBV in winnie's music. Less sonic experimentation and heavy distortion, but the same focus on creating catchy melodies with overdriven guitars and girl-guy duo singing parts.

Tonight at the O-Nest they played some new songs in Japanese (all the songs in first class were in English), which were good. They are a nice looking band on stage -- the guy singer Okuji hunches forward toward the mike as he sings, as if about to leap into the audience, while Iori, the girl singer, stands straight, looking peacefully contented. Tall for a Japanese woman, with long henna-dyed hair, she wore jeans and high heels, and with those heels she stepped on her guitar effect pedals, which I thought was the coolest thing. 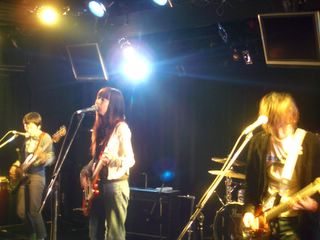 I've been to Aprils and Lost in Found shows before, but this was my first time to see Spaghetti Vabune! , a guitar pop band from western Japan. The one song of theirs I knew and liked, 'Jetset star' in a compilation album by the Japanese guitar pop indie label bluebadge, they played as the final song of their set before the encore (they were the last band of the night). A group that plays bright and energetic pop, they were loved by the dozens of well-dressed guitar pop fans in the audience.

At one point between songs, the girl singer held up a hand puppet of a cow, which announced to the fans in a high-pitched bovine (?) voice that a new album was in the works. This impressive feat of ventriloquism was accomplished by having a drummer talk into the mike in a falsetto voice while the singer flapped the puppet cow's mouth. Cutely wacky, in a way that maybe shouldn't be surprising coming from a band that calls itself Spaghetti Vabune. ('Vabune' is like 'zoom' in English, the sound of a rocket flying in the air.)

The Aprils' future dance pop isn't quite my thing, but there's no doubt their shows are fun. In the middle of the set, an aqua and white stuffed panda hobbled onto stage and swung its arms around to the songs, as the guy singer Imai urged the crowd to look at him rather than the panda. The panda outfit is said to have cost around 200,000 yen (about $2,000), paid for by the band's record label.
Posted by Ken M - Japan Live at 6:32 PM