Telstar Live at Zher the Zoo 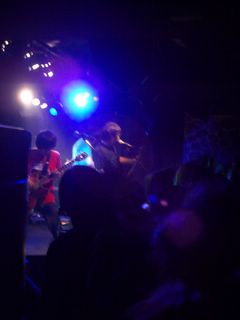 Telstar at Zher the Zoo.

The Unidentifiable Rocking Objects in the photo above are members of the Japanese rock band Telstar. They were playing tonight at a club that just opened this month called Zher the Zoo in Yoyogi (one station from Shinjuku), the first night of their Japan tour to promote their new album, Kokoro wo Furuwasetakoto (‘What Shook My Heart’, my translation). Because of late work I stumbled into the club in the middle of their set and had to see them almost directly from the side, but I’m glad I made the trip.

Telstar has been around for many years, and I’ve been an on-and-off fan. They are punk in a very pop, non-violent, boys-next-door, Japanese sort of way. If you locked a few suburban Japanese kids in a room and gave them electric guitars, amps and a copy of Never Mind the Bollocks, they might come up with music like Telstar’s. All of their song lyrics and titles are in Japanese. It’s hard, in fact, to imagine them singing in English. They’re probably not the type of sophisticated musicians that readers of, say, Marquee magazine would like. If a group like Pizzicato Five is champagne, Telstar is soy sauce. But sushi would be uneatable without soy sauce, and Japanese music would lack flavor without bands like Telstar.

The big crowd that comes to see Telstar is a good indication of how good this quartet is. They are about 95% female, mostly around college age, wear Telstar t-shirts in primary colors, and hop up and down madly to the group’s songs, a mosh pit made in heaven. It may be hard to tell in this photo above, but the Telstar boys would probably never find work as fashion models. But the girls love them, and this goes to show that looks aren’t everything. I think part of their appeal is that they are funny. They sometimes spend almost as much time wise-cracking on stage as they do playing their songs, and the Japanese love comedians. (Their website, even if you don’t read Japanese, is fun to explore.) They are also super-high energy.

When I first saw Telstar they were college kids but they are now working, and as a result I think they have less time to perform live than in the past. They said they won’t be playing in Tokyo again a while, which made me wish I’d gotten to the club on time and stood at a better place to see them. They played third out of five bands, and the final two bands, without naming names, were competent but bored me. I try to watch as many bands as I can, but very few dazzle me like Telstar does.
Posted by Ken M - Japan Live at 7:11 AM