Beaming At A BMX Bandit 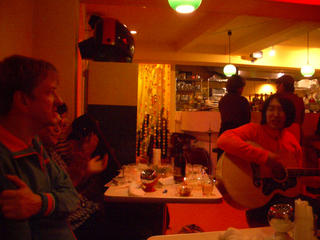 Thursday was my second straight night at the Koenji Club Liner, a new Tokyo live house that is hosting a lot of great events. I was there to see Plectrum for the first time in a while.

On the walk over to the club from the subway station I ran into Plectrum’s Taisuke Takata and Akira Fujiya chatting with a tall white guy. Ignorance is limitless—it wasn’t until Takata introduced me to the guy that I found out he was Douglas Stewart of Glasgow’s BMX Bandits, a band that enjoys hero status with many Japanese pop bands. Douglas would be jamming with us later, Takata said.

There’s one segment of Japan’s music scene that is deep into Scottish bands like the BMX Bandits and Teenage Fanclub (see my interview of Plectrum’s Takata, for example), and I’ve wondered how that came to be. Scotland is far away from Japan. But probably that distance is part of the appeal. These Scottish bands are so different from a Japanese kid’s everyday life. They are exotic, having a look and a sound that aren’t at all like those of Japan but feel right.

Whatever it is that accounts for the Japanese guys’ love of bands like the BMX Bandits, I got to see the love up close at the end of Plectrum’s set, when Douglas came on stage to do a couple of songs with the band, and even more later in the evening, at the after-show party. The bands moved to a music café in Koenji, a retro place painted bright red and orange, and Takata found an acoustic guitar and asked Douglas to sing a BMX Bandits song or two. At the end of each song, Takata would smile in his irresistible way and ask for another song (“Serious Drugs?” “Kylie’s Got A Crush On Us?”), and Douglas would shrug his shoulders and say, sure, and Takata would be off playing the chords for another BMX Bandits song. Takata was amazing—he knew the chords of all the songs (the top picture shows the two jamming).

As Douglas sat in his booth and sang in a voice that filled up the cafe, gesturing along with the lyrics, a half a dozen Japanese musicians sat around him, enraptured by the thought of a real BMX Bandit making music only a few feet away. As people do when they are ecstatic, the musicians said the simplest things to each other, like, “He’s playing right in front of us”. Many of these guys had been listening to the band for a decade. The feeling in the café was as warm and happy as could be, and I was glad I stayed late and was able to witness this, an audience with a music hero. 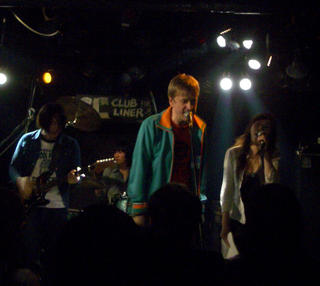