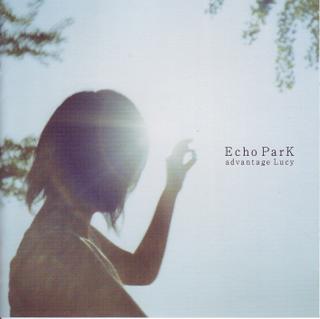 Like the sunlight that shines down on singer Aiko on its cover, advantage Lucy’s new album, Echo Park, is a dazzling work. This is my favorite Japanese album of 2005.

The Tokyo pop band kept their fans waiting long for this album: their last major releases were the two EPs, Anzu no Kisetsu and Oolt Cloud, in 2001.

But probably, considering all that advantage Lucy has gone through in those four years, this was about as fast as Echo Park could have been completed. If anything, I think that long period made the album richer and deeper.

Echo Park opens with the distorted guitars of “Glider”, and from there the band runs through eleven extraordinary songs, none of them anything but top-rate. Included are effervescent and driving pop songs like “Anderson”, slow but passion-filled ballads like “Akai Natsu” (meaning a red, or vermillion, summer), arty guitar rock numbers like “Shiosai” ('the sound of waves'), the straightfoward acoustic goodness of “Time After Time”, and much more.

In an age of MP3s and iTunes, when the single is King, advantage Lucy reminds you how powerful the album form can be. This is a CD made to be listened to straight through from the beginning to the final track.

It has many highlights. I love the way that overdriven guitars, horns and Aiko’s sweet voice magically mix together in “Anderson”—a 10 out of 10 rating pop song in my book.

“Shiosai”, the sixth track, is a desert nightscape of a song, where the objects—guitars, voice, Kimitoshi Sotomura’s jazzy drums—emerge from the darkness in glittering detail, as if shone by moonlight. I’ve never heard a song quite like this, and the more times I listen to it the deeper I feel myself under its spell. (After its intensity, the pure happiness of the next song, “Is This Love”, comes as a pleasant surprise.)

The second-to-last tune, “Everything”, lasts more than eight minutes, and reminds me of epic late-period Beatles songs like “Hey Jude” and “Let It Be”.

“Everything” could very well have been the last song of the album—it is a grand number, a wholly fitting finale. But instead, advantage Lucy took two acoustic guitars, a harmonica and recording equipment to a nearby park, and recorded out in the open a song called “Time After Time”, and made that the final track.

The wind was blowing so they had to record eight takes. You can also hear crows cawing in the background. But this simple song, with gorgeous chord progressionｓ, is advantage Lucy at its most basic, and gives the essence of the band's appeal. It sometimes sneaks up to me unexpectedly, over headphones on the subway or at home, and hits me with emotion.

A singer with a voice that is attractive but not naturally powerful, when she increases the intensity of her singing it sometimes feels as though the voice is at the edge of a limb, close to falling. But that makes the singing all the more compelling.

This is singing by someone you feel like you know, who loves music and pushes herself completely to express it. That may explain why many fans on Lucy’s BBS and other forums have said the eighth track, “Splash”, is their favorite song on the album: over a bright chord theme that is repeated throughout the song, Aiko’s voice soars, sometimes seems about to crash down, but never does.

A lot of the lyrics in this album, including those in “Splash” have to do with the passage of time, loss and remembering. “Time After Time”, for example, opens with a few lines about memories of the past, and then the lyrics address a person who is gone: “The more I chase you/ the farther away you run/ I look up in the sky/ where clouds are gathering / somewhere in this sky / do you travel still?” [translation mine].

Who is this ‘you’? I think that it is Takayuki Fukumura, who placed an ad one day in a music magazine to find the people that became advantage Lucy, played guitar for the band for a few years, quit the band but remained friends with them and stayed active in the music scene, and then, in November of 2003, passed away, too young, of heart disease.

Throughout the album are lyrics that seem to be written about him, and for him.

The past four years also saw Kaname Bamba, the band’s drummer from the beginning, develop a condition that made him unable to use one leg for drumming, and in the end he dropped of out of the band.

These things, plus a refusal to compromise and rush out mediocre music, and maybe a loss of direction and momentum at times, help explain the length of time it took this album to be completed.

But the finished product contains within it the gravity of those four years’ time. This is the same advantage Lucy of Fanfare and Station, essential albums of late 90’s Japanese pop music, but it is now also a group that is more mature and reflective. This is a band that has grown up.

At the end of the album, the last word Aiko sings is itsumo, Japanese for ‘always’.

Always is right. Always, this band creates beautiful songs that can’t be forgotten. Always, advantage Lucy is a band worth waiting for their new work, four years or five years or even a decade—though I hope the next wait is less. Listen to this album.
Posted by Ken M - Japan Live at 7:26 AM