A Year Without Takayuki Fukumura 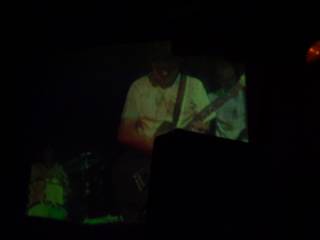 My personal best Tokyo rock show of 2004 didn’t turn out quite the way I expected.

Marking one year since guitarist Takayuki Fukumura passed away, the event on November 26 featured some of my favorite Japanese bands such as advantage Lucy and Vasallo Crab 75. A year ago, when advantage Lucy performed soon after the death of Fukumura, who had founded the band, their playing was impassioned, a musical farewell to a friend. It was a show I won’t forget. On the subway over to Friday night’s event, I thought about the show last year and all that had happened since then (like my becoming friends with members of advantage Lucy). At this latest show, I expected some of those same emotions as last year to emerge. But, in fact, the show was completely different in mood. This time, it was plain fun. The musicians remembered and celebrated Takayuki Fukumura’s life. 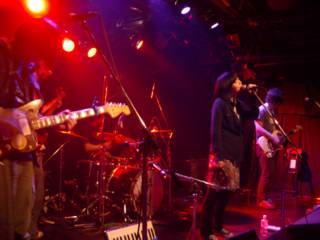 Advantage Lucy at the Que.

The show started at the Shimokitazawa Club Que at 6:30 in the evening, moved to the Loft in Shinjuku at midnight, and continued until about 5:30 in the morning. Eight bands and solo musicians played: Three Berry Icecream, Lost in Found, Orang, advantage Lucy, Vasallo Crab 75, patrasche, Apila and Sweet Onion. Fukumura was a guitarist for advantage Lucy and Vasallo Crab 75, and played a role in the music-making of every one of the other bands as well.

Although all of the bands were good, the best show was advantage Lucy’s second of the night, the final act. Lucy singer Aiko looked sleepy. "Advantage Lucy hardly ever does all-night events, because at night, we sleep," she said. At one point, Aiko even forgot the name of the next song the band was going to play, in her drowsiness. 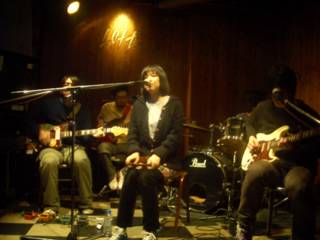 Advantage Lucy at the Loft.

Advantage Lucy is very laid-back in that sort of way. They are like the kids next door that formed a band, a familiar quality that is one reason why their fans love them (and the several dozen people who were still there at 5 in the morning to see them were no doubt some of their most die-hard fans – me, among them). But the reality is that very few garage bands, the bands-next-door, ever will write so many melodies as simple and gorgeous as advantage Lucy’s. Nor will the poet next door write lyrics that stay in the mind like those that Aiko creates. Advantage Lucy is a band that inspires kids to take up music, but at the same, is in truth beyond their reach. As Aiko wrote, in an uncharacteristic moment of immodesty, when she first rehearsed with the band (then called Lucy van Pelt, in the mid-90's), "I thought it was better than any band I’d listened to." At an hour when the sun was about to rise outside, advantage Lucy played a truly soulful set, watched by their most devoted fans.

According to Aiko and Yoshiharu Ishizaka, Lucy’s guitarist, though Ishizaka composed the music Fukumura was the one who, in a way, made the Lucy sound, lending others in the band bundles of pop CDs that he liked, disks by artists like eggstone, HappyDeadMen, Ivy and Cloudberry Jam.

In introducing one of their songs, Aiko said the song they are about to do is one they had initially decided wasn’t good enough to be recorded, but Fukumura really liked it so they recorded it after all. That song was ‘Citrus’. Which blows my mind. ‘Citrus’ is one of Lucy’s defining, classic songs, and to think that it might not have been, if not for Fukumura’s intervention... Advantage Lucy fans can thank him for that alone. 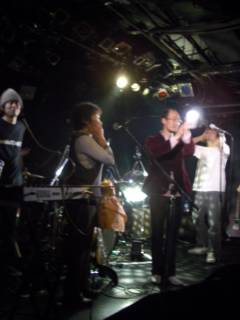 At the end of Vasallo Crab 75's show at the Que, Fukumura’s mom went up to the stage to give flowers to the band and to thank the musicians and fans. Fukumura was a lover of ramen noodles and curry rice, and she showed a picture of him looking happiest (according to her), eating something at a table.

All through the show, shoes that Fukumura had worn sat on top of one of the amps. His mom said she felt the warmth of his friends at the show tonight, and said her son had lived a happy life. She brought the shoes down from the amp and put them on the ground, saying that now everyone can move on from sadness. It was the one tearful moment of the night. 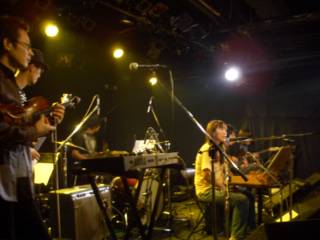 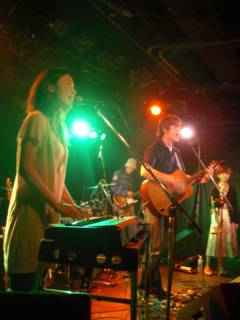 Lost in Found at the Que. 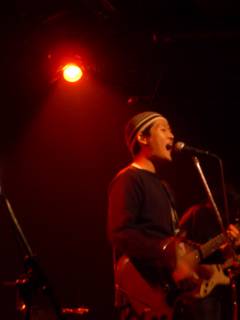 Orang's singer, at the Que. 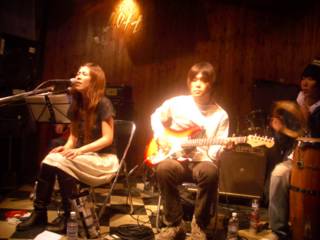