The Tokyo Rock Show of the Year 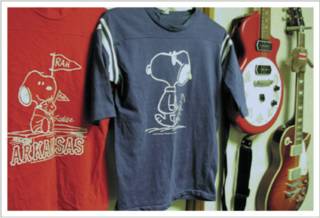 The Tokyo rock show of the year hasn’t happened yet, but I know it will be an incredible music experience. There are wonderful shows every night in Tokyo, I know, but this will be MY rock show of 2004.

Performing at it will be some of my favorite bands, bands that I’ve praised in the pages of Japan Live – advantage Lucy, Vasallo Crab 75, Apila, Orang, Lost in Found and others. These groups will all gather on November 26 at the clubs Shimokitazawa Que and Shinjuku Loft.

When I first found about the show, I was moved. I’d been thinking about how to spend November 26, and this was the perfect answer.

November 26 marks a year since Takayuki Fukumura, guitarist of advantage Lucy and Vasallo Crab 75, passed away of heart disease. He was in his late 20's. I didn’t know Fukumura personally, and only knew him through his music, but his death ended up changing me in some ways.

Less than two weeks after his death, advantage Lucy was scheduled to do a show in Ikebukuro. I wasn’t sure whether they’d go through with it. It was clear the loss of a close friend and band mate was weighing heavily on them.

But they played. And it was one of the most moving show I’d ever been to, one I’ll never forget.

Starting with the song ‘Red Bicycle’, whose dazzling opening arpeggio was Fukumura’s creation, it was nearly two hours of beautiful and intense rock music, humor befitting Fukumura’s personality, and also, of course, sadness.

It was a great show that made me wish I could also have such a final send-off one day.

It also made me want to know more about these musicians. That desire pushed me to meet them, listen to more of their music and write about it.

I wanted to mark the one year’s time in some way on November 26. Then I heard about the show. Of course! He was a rock musician and would have wanted us to play music and dance to it, to remember him.

All the bands playing that night had worked with Fukumura at some point.

The evening will start at the Que around 6:30 and run until about 10, then the venue will change to the Loft in Shinjuku, where the second part of the show will begin at midnight and last until the morning. We’ll take the Odakyu train from Shimokitazawa to Shinjuku, to continue the all-night party, in honor of a great musician.