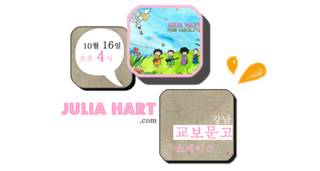 I returned home today to find in my mailbox a padded envelope from Seoul containing something very cool -- the new single by Korean rock band Julia Hart. The sender was Wonyul Lee, Julia Hart's bassist. I'd met and become friends with Wonyul in March, when I went to Seoul to see the Japanese bands advantage Lucy, Plectrum, Miniskirt, Lost in Found, and Korean band Linus' Blanket play live. Wonyul plays bass for Linus, but his main band is Julia Hart.

This was the first time I heard Julia Hart's music, and I found it utterly charming, exciting and fun. The title track, 'Miss Chocolate', is a catchy 3-minute pop song that could have been a 1950's radio hit. It has a Korean and an English version, and the latter contains the delicious lines, "I'm the kind of boy who thinks we'll get married when you just smile/Well, I know I'm semi-stupid/But I guess you are my cupid".

The other two songs' titles are both written in Hangul and sang in Korean so I don't know what they are called, but they're both good too. Song two is a more rocking number than 'Miss Chocolate', and song three has a 60's Flower Children feel because the guitar uses the echoey effect pedal which I think was popular during the latter part of that decade [help me out here, Wonyul -- what's that effect pedal called??].

I'd really like to see Julia Hart play live sometime. If you, for some reason are in Seoul and are reading this and don't know about Julia Hart, you should try to check them out and also buy 'Miss Chocolate' while you are at it.

I was flipping through Julia Hart's home page (which includes MP3 files of their songs, including a cover of Cheap Trick's Surrender, if you are curious to know what they sound like), and I found this photo of the band below that I liked. The combination of the blue sky, the trees in the background, and the mysterious huge white screen at the back of the stage is aesthetically very satisfying, wouldn't you agree? 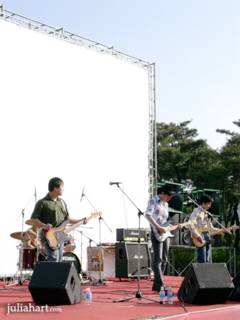 Julia Hart of Seoul (from juliahart.com)