Hi-5 at the Shibuya O-Nest 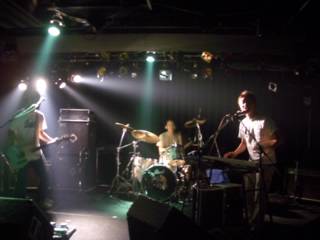 Hi-5 at the Shibuya O-Nest.

Playing tonight at the Tokyo rock club Shibuya O-Nest were Hi-5, School Girl 69 and Condor 44. The first two of those bands are both from Kita-Kyushu, an industrial city in the southern island of Kyushu. (Wonder what the deal is with Japanese bands and their love of adding numbers to their names, by the way?)

The musicians in Hi-5 and School Girl 69 all went to the same Kita-Kyushu university, where they were members of a school rock music club (a common place for rock musicians to meet and form bands in Japan).

Hi-5, a synthesizer-guitar-drums trio, was School Girl 69's sempai in the university club, that is to say, they are older and began university before School Girl’s guys did. It’s a very Japanese concept – the sempai is supposed to lead by good example the kouhai, the younger ones, and give advice about how to succeed in school, club activities, and so on.

So, tonight, Hi-5's singer and synthesizer player said: "Since we were School Girl 69's sempai in university, we feel we have to set a good example" by playing a rocking show. Which they did, but they played so hard the guitarist was panting by the end of the third song. It was great rock ‘n roll.

Throughout the show the singer gave something like a Black Power salute, pounding his chest with his fist and then raising the fist in the air. I have no idea what’s behind that.