The Clicks at Shimokitazawa Que 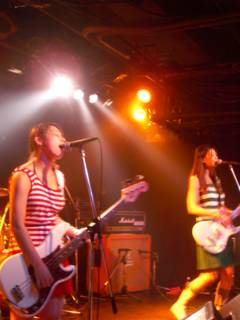 The Clicks at the Que.

This is my third time seeing all-girl rock ‘n’ roll trio the Clicks, tonight at the Shimokitazawa Que, in western Tokyo.

They were playing with three other bands at an event organized by K.O.G.A. record label owner Mr. Koga, who, vague rumor has it, likes good-looking women.

The Clicks are certainly a pleasure to see as well as listen to. They all wore striped tanktops and mini-skirts, each with her theme color (green, red and blue, I think). They play basic, uncomplicated, pop-ish rock. The band probably won’t change the world. They probably won’t end up in the Rock 'n' Roll Hall of Fame either (though, one never knows). But still, I listen to their album a lot, and always have fun at their shows.

I mean, if you are three pretty girls, are in a rock band, can play your instruments well and have a lot of spirit, it’s hard to go wrong.

UPDATE: Just realized this is my 100th Japan Live post.