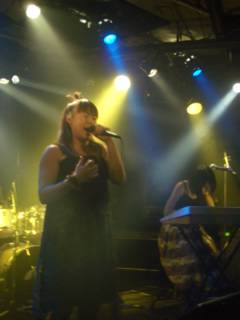 Orange Plankton at the Garage.

Today was Day of Culture, a Japanese national holiday originally meant to celebrate the birth of the Meiji Emperor, but now a break for citizens to enjoy ‘culture’.

I decided to use the day to appreciate culture of the pop variety – specifically, Japanese rock ‘n’ roll.

It was a beautiful autumn day, and I went on a walk though Todoroki creek park, home to a Buddhist temple, to Tama River, where people played baseball and soccer, had barbecue parties and walked dogs on the wide banks of the river. During the stroll, I played on my iPod the Japanese bands Spangle Call Lilli Line (a recommendation of Scott Mackie of LA) and Orange Plankton. That’s one form of cultural activity. 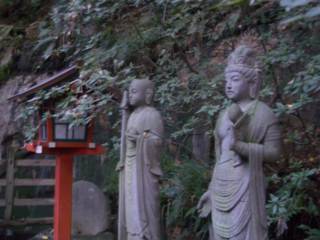 At a Buddhist temple in Todoroki creek park.

Later I went to Shimokitazawa to catch a show by piano pop band Orange Plankton at the club Garage.

It was Orange Plankton’s first real show in Shimokitazawa (in Tokyo they play mostly in Shibuya), and they were in top form.

They must have made new fans tonight. I know that my friends Dr. I and his girl friend were impressed enough about the band’s performance that they bought a copy of their new album, Wakusei Night.

As I watched them, I wondered what made their shows so gripping. They aren’t a flashy band: No costumes, no crazy stage antics, no show-off solos. But they make you pay attention.

Singer Yumi is one big reason why Orange Plankton shows are exhilarating. It’s strange, but in Yumi, a petite woman from the rural prefecture of Ehime (she grew up by the sea), I sometimes see the image of an American jazz or blues songstress.

Like a performance by a good blue singer, when Yumi is singing and is on a roll, she can pound the audience with the emotions of her songs. She hardly ever stops moving during shows, walking from one side of the stage to the other to reach out to the crowd. But she never looks restless, and instead her moves seem to flow magically with the music.

There was warmth and excitement in the Garage after their show. Maybe it was the start of their break into the Shimokitazawa scene. 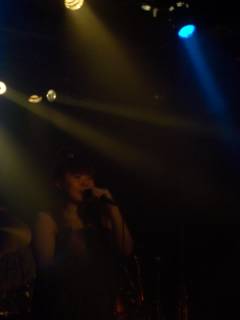 Chieko Nakane, a female bassist/singer, formerly of the band Campanella, was another act at the Garage show that stood out. She sang shyly but with a lot of joy, and she had an attractive low, semi-husky voice. 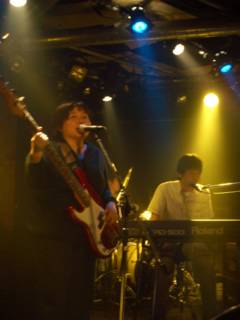 Chieko Nakane at the Garage.

The final act and the organizer of the event was a rock trio called Life Time, who were fun to listen to and even funner to watch. The drummer wore a big rainbow clown wig and a shining bow tie, while the mohawked bassist had on a T-shirt saying "Samurai" in Chinese writing. 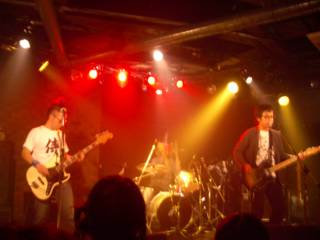 Life Time at the Garage.