Metro-ongen & Throw Curve at the Que 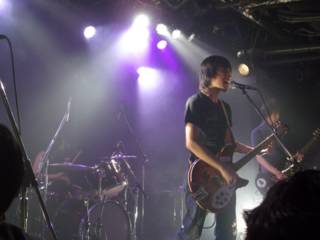 Rock quartet Metro-ongen, who I saw for the first time at Club Que in Shimokitazawa tonight, reminded me a bit of the Beatles, at least appearance-wise.

Like the Fab Four, the singer played a Rickenbacker guitar. The bass was left-handed like Paul, though he played a Fender rather than a Hofner violin bass. In place of Ringo was a charming girl drummer, who was all smiles but pounded out wicked beats. As for the lead guitarist, I wasn’t sure if he was into eastern religions like George Harrison, probably not, but neither was George until about 1967 or so. Between songs the guitarists and bass joked around and made fun of each other, and the audience, mainly girls, loved it, though admittedly there wasn’t any sign of Metro-ongen-mania, that is to say, fans screaming uncontrollably and fainting.

Music-wise, there wasn’t much that connected them to the Liverpudlian lads, except that they too play rock. Metro-ongen uses a lot of distortion (the lead guitar had a mysterious box on top of his amp with lots of dials that let him make industrial-sounding noise), and like other bands in the Shimokitazawa scene they seem to be influenced by an eclectic mix of punk, psychedelia and shoe-gazer music. The girl drummer and left-handed bass build a solid foundation of beats, from which the two guitarists were able to soar musically. Metro-ongen, a good-looking band with members sporting Rubber Soul-era Beatles haircuts, was actually quite fab. I loved their 2nd album (see post below), and was glad I went to see them. 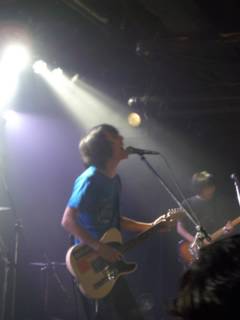 Throw Curve at the Que.

Playing before Metro-ongen was Throw Curve, who I’d seen at the 251 recently. Throw Curve went to the same college as Metroongen, and were in the same rock music club (a common place for rock bands to be formed in Japan), though the guys in Metro-ongen were in an older class than Throw Curve. The way things are done in Japan, that means Metro-ongen is Throw Curve’s sempai (translating to something like 'older fellows'), and they are supposed to look out for the younger guys and lead by good example in place of being shown respect. And, indeed, the singer of Metro-ongen was wearing a Throw Curve T-shirt.

Members of the two bands also worked at the same part-time job at one time, Throw Curve’s singer said. 99.9% of Japanese indies musicians do one sort of marginal part-time job or another to support their musical activities. It must be a cause of despair for some of the parents of these band members, to think that after spending bundles of money to pay for private school education, cram school fees, then tuition for private universities, their kid is working at a convenience store by day so he can play rock music at night. No matter, they're a source of joy for fans like me.