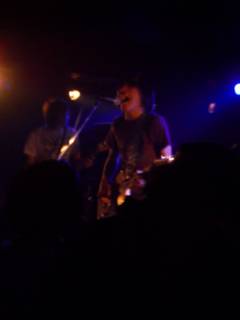 Tonight I went to see some Japanese rock bands I used to listen to a lot but have neglected recently, for one reason or another. They were: Farmstay, Throw Curve and Hoover Ooover, playing at the Shimokitazawa Club 251 in western Tokyo (another band called Onsoku Line, who I only heard the name of, also performed).

Farmstay is a quartet, led by singer and guitarist Masatoshi Asauchi, who is handsome in a reptilian way. Every once in a while he hops on the stage monitor, staring into the darkness of the club like a predator.

The one girl in the band, bassist Yosiko, looks like a young Japanese version of the Pretenders’ Chrissie Hynde. With an unchanging look of relaxed concentration, she plays fiery bass licks.

Farmstay (meaning of name unknown) borrows heavily from the musical vocabulary of punk and hardcore -- aggressive and heavy guitar and bass chords, and fast rhythms. But they aren’t a punk band (there weren’t any spiked motorcycle jackets and mohawks in the audience), and you also hear influences like funk and new wave in their music, while Asauchi sometimes raps hip hop-like.

They’re an energetic and exhilarating band to watch. I remember being ecstatic after several of their shows last year. But then at some point I realized that some of what looked like exciting and spontaneous action on stage, such as Asauchi’s jumping on the monitor, was actually done at every gig, and I became bored. Now after about a year’s absence, the band seems fresh. For the near future, rather than home stay, think I will Farmstay (sorry).

I saw Throw Curve once or twice before, and have a CD of theirs, but I never got into their music enough that I wanted to make a major effort to go to their shows. Tonight I did, and it was worth it.

Throw Curve has a Shimokitazawa sound: not too heavy, musically adventurous, but without taking themselves too seriously or getting carried away. Their songs remind me of the way that in some traditional Indian music, the sitar and other instruments go in separate directions in long passages but come together at key moments. That’s the way Throw Curve’s guitars and bass parts sound. In other words rock music-wise they don’t go for the straight pitches, and that makes them an interesting band to listen to.

I have one of Hoover Ooover’s CDs, but had never seen them live, and the show tonight didn’t impress me that much. The music was pleasant pop, but the female singer and the rest of the band didn’t try that hard to connect to the audience, and their songs weren’t good enough they could stand on their own without any help from the band’s personality, which I didn’t get any feel for tonight (except that they are a shy band, maybe).