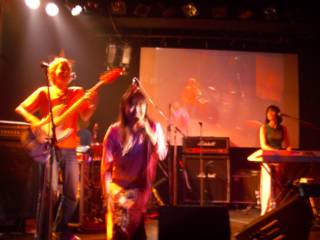 Tokyo piano pop band Orange Plankton played three shows this week, a busy schedule, and last night was the last of the three performances. They will play one more show in Tokyo on November 24 and then will take December off.

A good idea. In addition to doing shows about every other week this year, Orange Plankton has gone on a national tour, released a single and a new album, on top of holding jobs to support their musical activities. Taking time off sounds like a wise plan.

But all those shows they did this year have paid off. At last night’s gig at a club called Harajuku Rekio, the band’s performance was tight, and they were a joy to watch.

They have a new, rocking tune having to do with bacteria that produced oxygen on earth at the dawn of time. (Singer Yumi gets ideas for some of her songs from science programs on TV. She’s the only musician I know who can make wonderful songs out of our planet’s beginnings...) It’s a call and answer song – Yumi sings "yeah-ah" and then audience is supposed to answer, "yeah-ah". Unusually for Tokyo's reserved rock audience, when she called out, the small crowd around me replied to her, though quietly and shyly. Maybe because it was such a swinging, nice tune. And getting a response boosted Yumi’s energy level even more, it seemed.

The Rekio is a tiny club in the middle of nowhere in Harajuku, a mutiple-personality town in western Tokyo that combines: haute fashion boutiques like Gucci; teenybopper stores selling British punk and goth outfits and teen idol photos; trendy restaurants and bars; and one of Japan’s most important Shinto shrines, the Meiji shrine.

Rekio’s bar specializes in awamori, the potent liquor from the island of Okinawa. Behind the stage there was a movie screen, which had animation movies by Hayao Miyazaki playing between shows, and during performances showed the bands playing live in various angles. It was a bit meaningless (I mean, you can see the band right in front of you one meter away), but fun in a way too.