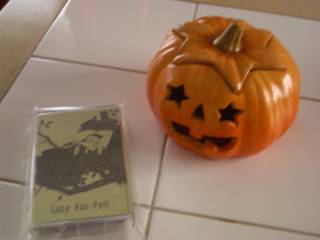 At last, at last, I got to listen to Lucy Van Pelt’s Red Bicycle tape.

This is the historic first recorded work of the brilliant Tokyo rock band now called advantage Lucy (they used to be Lucy van Pelt but changed their name to avoid copyright problems, Lucy being the cartoon character that always pulls the football away from Charlie Brown at the last second).

The band members made the tapes themselves at home and sold them at shows in the mid-90's, so the only existing copies are those owned by fans. If you asked me which would excite me more, getting my hands on the butchers and dolls cover version of the Beatles’ Yesterday and Today album, or the Red Bicycle tape, I’d have to say, the latter.

Lending the tape to me was another diehard Lucy fan, Dr. I. He’s vague about how he acquired the treasure.

We and his girlfriend had dinner after an Orange Plankton show, and after we clinked our glasses, he brought out from his bag the tape, carefully wrapped in plastic, and handed it to me.

There is was, as I’d imagined it. The green tape cover had a woodblock picture of a baby sleeping in a cradle. The tape gives singer Aiko’s full name (she goes only by her first name now) and the contact address listed was that of guitarist Takayuki Fukumura’s home in Saitama prefecture, next to Tokyo. I went home and copied the tape on a mini-disk.

In Red Bicycle, Aiko sounds very young (it was about eight years ago, after all) and sings with less skill than she does now, but the bright guitar pop sound is unmistakably Lucy. The tape contains a live recording of the classic early Lucy song, Red Bicycle. At shows like those recorded here, Lucy attracted a following that eventually led to their being signed by major label Toshiba EMI.

(Though they ended up leaving Toshiba EMI and returning to being an indies band. I know there are some partisan fans who stopped listening to them when they went major label. What a waste! These fans are missing two outstanding Toshiba EMI-era albums, Fanfare and Station, and two great mini-albums for Lucy’s own label, Solaris Records. And, judging by their recent shows, Lucy’s newest songs are some of the best they’ve created.)