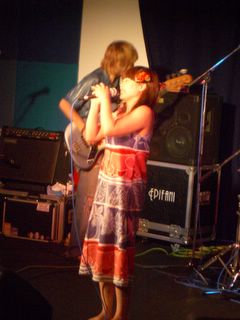 Orange Plankton at the Paraiso in Okinawa. 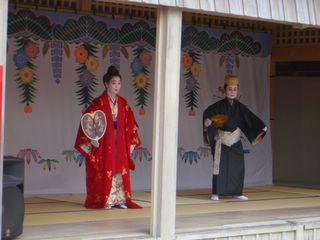 Well, the latter I had figured out already, long before my Okinawa trip. Orange Plankton, the Tokyo-based piano pop quartet about whom I’ve written many times, plays songs that sound familiar but are unlike anyone else’s.

That Okinawa isn’t Japan is something I suspected for a while but wasn’t certain about until this trip. It is true, Okinawa, an island reached by a two-and-a-half hours flight south from Tokyo, is part of the Japanese nation. And Okinawans speak Japanese, though they have their own dialect that can be hard for outsiders to understand. But culturally and ethnically, Okinawa is very different from mainland Japan.

Okinawans, first off, look different from the Japanese of the four main islands up north. The people of Okinawa are smaller and often look a bit like Native Americans. The Japanese, on the other hand, have similar features to the Chinese and Koreans. I won’t go into details but that probably has to do with the history of invasions in ancient Japan.

There are also things in Okinawa you never see in Japan, like the seesah, the sculpted lion pairs that sit atop gates and walls all across the island to ward off evil spirits. 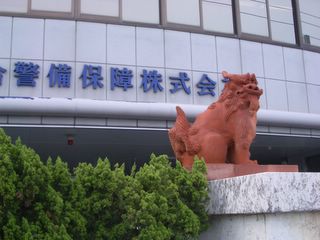 And the people of Okinawa are also much more easygoing than the mainland Japanese (by which I mean residents of Japan’s four main islands—Honshu, Shikoku, Kyushu and Hokkaido). For example, you hardly ever see men in Okinawa wearing wool suits in the hot weather (in contrast to mainland Japanese, who do so even in the sweltering summer), and you see women and men of all ages wearing Hawaiian shirts (or, Okinawan shirts?). I saw one elderly man at the airport wearing a brightly colored shirt decorated with images of the bumpy green bitter-melon, one of the favorite Okinawan foods. 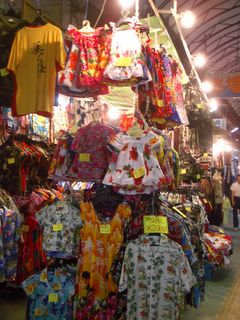 I watched several Okinawan rock bands play. While none of the bands’ music interested me very much (they didn’t seem too original), the musicians seemed to be cheerful and laid-back, cracking jokes between songs, and during their performances often broke into Okinawan dancing, arms thrust in the air with the palms facing the sky.

At the indies festival where Orange Plankton played, about half of the bands were from Okinawa, the other half from Tokyo, and there were also several ‘guest’ artists, veteran bands booked to attract more audience. But these veteran groups were all hard rock and heavy metal acts that had seen better days a decade or more before, has-been bands like BowWow, and it was unclear how much they helped in boosting the audience count (I think the crowd was somewhere between 300 to 400 people).

Orange Plankton did three songs, including a lovely new tune called ‘Fuwari Fuwari’ that was being used in a TV commercial for student apartments. The show started with an extended monologue by singer Yumi that dealt with matters such as the dawn of life on earth 4.5 billion years ago—her talk appeared to mystify some in the audience but piqued the interest of others. It was their biggest show to date, on a large stage in front of hundreds of people, and they handled it well. 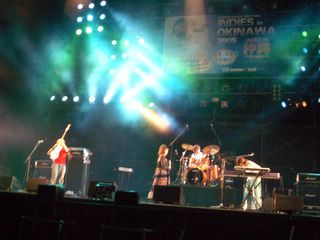 But it was clear there were things Orange Plankton could learn from the has-been bands. Though I wasn’t a big fan of the hard rock fare of the has-beens, it was obvious all their years of playing big concert halls had paid off, and they had become expert at getting crowds going.

One of the has-been bands was the heavy metal group Loudness. My relationship with heavy metal isn’t quite love-hate, but maybe more like like-dislike: I usually don’t listen to metal much, but then sometimes I hear a great song or see an excellent show and buy a metal CD in my excited state, only to never listen to it more than once or twice. Watching Loudness, a band that has been around since the 80’s, was one of those ‘like’ moments. They played super-aggressive, fast heavy metal, and the guitarist’s fingers flashed across the guitar neck at almost inconceivable speeds.

Orange Plankton will never be Loudness, nor would I want them to be, but if they ever do play stadiums or arenas, there are things they could rip off from the likes of Loudness for playing big shows.

But, in truth, I got bored of Loudness’s antics in about fifteen minutes. Meanwhile, Orange Plankton created some new fans at the festival show. One guy bought all of their CDs after their performance. Another guy (not sure if it was the same person), wrote in Orange Plankton’s BBS that, “to tell the truth I’d gone to see Loudness, but seeing Orange Plankton live for the first time I was so moved I cried,” and that “Okinawans are shy people so we listened to the show quietly, but we knew what you were trying to express.” 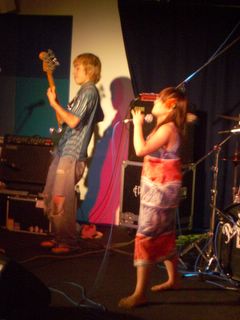 Sunday, the day after the festival show, Orange Plankton was scheduled to play a small Okinawan club about midnight, and had free time before then. Singer Yumi, who grew up next to the ocean in Ehime Prefecture, wanted to go swimming.

So the band, staffers, friends and fans headed to one of the beaches in Okinawa. Yumi led the group by dashing into the water to swim, and we spent the next few hours examining the marine life in the rocky beach: crabs and hermit crabs, sea cucumbers, squilla, and tine blue damselfish.

Spending any amount of time with Yumi is to discover a person who is warm, creative and quite unlike anyone else. Tiny in size, she has a squeaky high voice that is easily recognizable even coming from a crowd of people. She carries around a notebook she made herself with lots of little pictures, on which she writes ideas, images and the ingredients of new songs—she’s the one who creates almost all the music and lyrics of Orange Plankton. Yumi likes nature programs and thinks about space, the beginnings of the planet earth, the mysteries of the human body, other countries’ cultures, and many other things. She reminds me of the girl sung about in ‘Little Wing’, who has a “circus mind that’s running wild” who thinks about butterflies, zebras, moonbeams and fairy tales.

It was amazing to me that Orange Plankton had the energy to do a show near midnight after a full day of running around, following a late night celebrating over Okinawan awamori liquor, but they did, and their show Sunday night at a club called Paraiso was fantastic. I was headed for the jungle island of the Iriomote the next day so I parted ways with the band at the relatively early hour of one in the morning, knowing though that I’ll take from these couple of days many good memories. 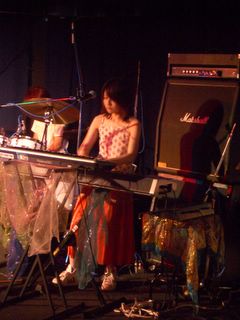