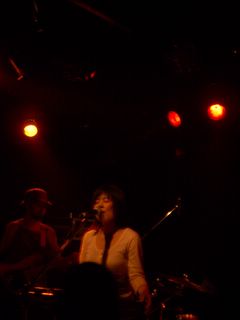 Advantage Lucy's Aiko at the O-Nest.

First, a news flash for fellow advantage Lucy fans everywhere: the Tokyo pop band’s very long-awaited new album will be released in the next few months, and will be called Echo Park. It will contain about a dozen songs. Those who have heard the works-in-progress say the final album will knock you out. How long we’ve waited to be KO-ed by a new Lucy album!

Lucy singer Aiko announced this happy news during Sunday night’s show at the Shibuya O-Nest. (She said the specific release date would be announced at their next show in June.)

Earlier, Aiko also announced another piece of news that wasn’t good at all—a month ago she had been hit by a car while bicycling, and had broken a collarbone when she fell. She also hit her head (though the collarbone acted as a shock absorber, apparently that's how the human body is designed), and because of that she’s lost about five hours’ worth of memory, from when the car hit her to when her parents came to see her at the hospital.

But besides the broken bone she was fine, and, showing her optimistic side, Aiko says she feels that her mind is somehow reset because of those five missing hours of memory, and she feels energized because of that.

Except that announcement on stage, Aiko didn’t talk about the accident or the injury at all. But she was in a bit of pain during the show, because the bone still wasn’t completely healed. Until she hit the stage her arm was in a sling. On stage though, the only way you could tell she was hurt was in the way she leaned slightly to her side when she played the harmonica because she still couldn’t raise one arm completely.

The way Aiko went on stage and did a fantastic show despite the injury reminded me of something I’ve observed about her personality. While usually a laid-back, modest and friendly person, when it comes to performing, Aiko is completely serious, almost obsessively so. I remember the night before advantage Lucy’s first ever show in Seoul, for example, Aiko spent much of the night at a café preparing detailed schedules for the next night’s shows while the others hung out and chatted. And probably that’s not out of the ordinary for her. She goes through the trouble because I think she wants to keep the stage a special place: it’s where she can really soar, and become the person she wants to be.

Although I’m a devoted advantage Lucy fan, at times I become uncertain as to whether past Lucy shows were truly as good as I remember them, or whether their next show will measure up. But then, I go to the show, and almost inevitably, I’m blown away. I know I was at the O-Nest show.

What’s their secret? Of course there’s the music, which is gorgeous, melodic pop, and which the band plays with skill and passion. But another big thing is that the group performs with so much joy. At times on stage, they seem almost radiant. When I saw them for the first time at the Que nearly two years ago (I’m a nut, I can even remember the exact date—August 6), I remember after the show I walked around the streets of Shimokitazawa like I was on a cloud. I still feel that way sometimes after Lucy shows.
Posted by Ken M - Japan Live at 7:28 AM