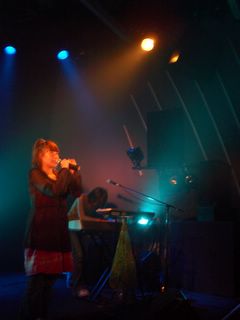 Orange Plankton at the Roppongi Morph.

Seemingly every foreigner in Tokyo makes it to Roppongi sooner or later. And most of them conclude quickly that the gaijin entertainment ghetto is a big, uncool dive.

I, however, don’t mind the place. The touts for the gentlemen’s bars and cabaret clubs who march up and down the streets are entertaining, and Roppongi seems to ooze with sleaziness and sin accumulated over decades of being one of the city’s premier entertainment districts. Here, once (still?), Japanese celebrities, yakuza gangsters, right-wing bosses, American big-shots, and hipsters and hustlers of all hues gathered, and there are still little reminders of those days. There are also decent restaurants, bars and clubs.

In one of those clubs, the Roppongi Morph, Tokyo pop band Orange Plankton did a show. Apparently, the manager of the club saw them performing on the street in Shibuya (as they do every Sunday these days), and invited them to play at the Morph. It was a new and clean club, with a high ceiling and fancy light system.

Orange Plankton are headed next week to the southern island of Okinawa to play in front of thousands of people at an indies band festival, and this show tonight was like a dress rehearsal for that big gig-- a good performance. I’m headed to Okinawa with them next Friday, my first trip to the island.
Posted by Ken M - Japan Live at 7:36 AM