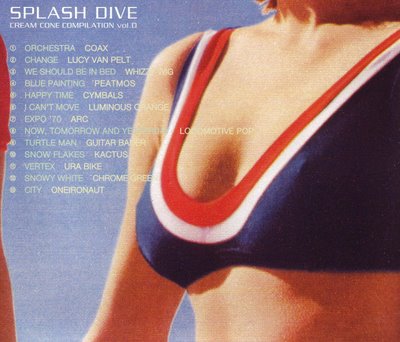 The albums themselves are often a mixed bag—some songs are good, but others aren’t and are destined to be fast-forwarded over every time after the first listen. Still, I listen to these albums because they are where I most often find the brilliant band I knew nothing about and seemingly came out of nowhere, but plays that one dazzling, rocking song that makes me want to know everything about them and go to all their shows.

It is after all by listening to a compilation called Killermont Street 2001 a few years ago that I made my happiest Japanese musical discovery to date—the discovery of a group called advantage Lucy, who contributed a song named “Chikyu (faraway version)” to the album (a side-note: any true Lucy fan should try to get a hold of this album because it contains a beautiful, mellow version of “Chikyu” that must be listened to, with a recording in the background of European kids playing in a park somewhere, giving the song a dreamy feel).

Listening to compilation albums is also a way to see a snapshot portrait of a musical era and some of the bands that were active at the time, and recently, by buying a couple of albums that include early songs by advantage Lucy, I’ve been able to better understand the mid-90’s Japanese guitar pop/neo-acoustic scene.

The two albums I bought through Yahoo’s auction site were Splash Dive Cream Cone Compilation Vol. 0 and Pop Jingu Vol. 1. I’d been looking for the two CDs for a while, because both contain songs by advantage Lucy (called Lucy Van Pelt at the time), but both were out of stock. As someone who wants to listen to every single recorded version of all Lucy songs (and advantage Lucy is one of those cool, creative groups that make a new version of a song each time they contribute it to a compilation), I was excited to see those two albums offered on auction (though I later found out that I can also buy both on Amazon Japan’s used CD market—how easy things are in the Internet Age!).

An added joy to listening to these albums came from the fact that I was able to discover some great old bands. Both Splash Dive and Pop Jingu, for example, included songs by two bands I didn’t know about but I truly dug, Peatmos and Kactus. I looked up Kactus on the Net, and found out that the group disbanded a number of years ago, and an American member of the band went home. I’m not sure what became of Peatmos, a band featuring a female vocalist with an unforced, ethereal voice, and a crunchy acoustic guitar sound. 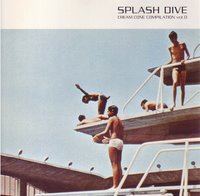 Splash Dive, which shows a somewhat homoerotic photo of a pool scene on its front cover (and a, um, COLORFUL photo on its back cover, shown above), includes other interesting stuff. One is a song by “Guitar Bader” which I assume is a misspelled rendering of Guitar Vader. It also has a song by “Cymbals” called “Happy Time”, but I’m not sure as to whether this is a song by THE Cymbals, since it is more hard rock than the pop of early Cymbals, features a male singer rather than Toki Asako, and the album itself came out in 1997, which means it preceded THE Cymbals’ debut album, released in 1998. 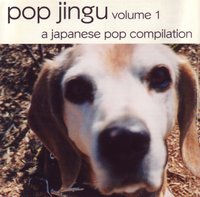 Meanwhile, Pop Jingu, with an out-of-focus picture of a forlorn-looking retriever on its cover, includes one very remarkable song: “Color Is Navy”, by Maples. Why remarkable? Because “Maples” was the name of the one-person unit of advantage Lucy singer Aiko, in which Aiko sang and played the guitar alone. As far as I know this is the only recording of Maples. It’s good—simpler and sleepier-sounding than Lucy songs. The album also contains songs by bands like 800 Cherries and Color Filter.

The two albums were both released nearly a decade ago, in 1997, but they still sound fresh. The type of music recorded in them may have fallen out of fashion to some extent in Japan, though there are still die-hard fans and bands that play for them. I like this music because it isn’t pretentious, can be played by just about any group of people with guitars, but the end product is often surprisingly gorgeous and memorable. I’m waiting for more Splash Dive’s and Pop Jingu’s.
Posted by Ken M - Japan Live at 7:28 AM