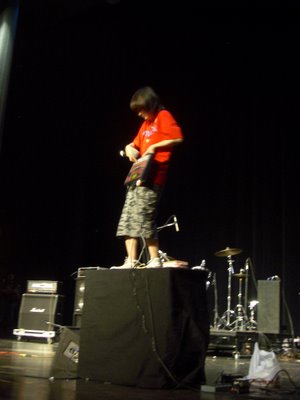 Definitely not for the first time, I found myself last week watching a rock show with a crowd of people that were younger than me and dressed differently. But no one in the whole city dressed like these guys. There were chubby masterless Samurais, carrying cardboard swords the height of two adult males. There were Lolita maids in black lace, and schoolgirls in primary-colored school uniforms that don’t exist in real life. There was a whole battalion of galactic officers in sky-blue uniforms with gold sashes. And hundreds others like them. 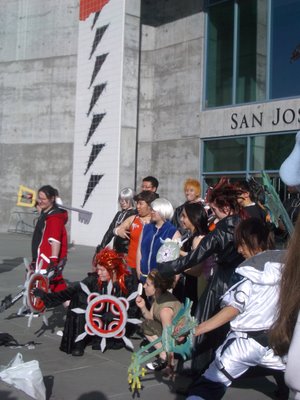 I had come to San Jose, California, as a participant in Fanime, a convention that brought together thousands of anime fans for a few days of costume wearing, video watching, and animation merchandise buying. But I myself wasn’t there because of anime—my knowledge of Japanese animation ended around the original Gundam. Rather, I had flown from Tokyo because I found out that Swinging Popsicle and five other Japanese rock groups were going to be performing at the convention, and I wanted to see how that would turn out.

What it ended up being was a grand collision of two Japanese subcultures, anime and J-indie, that didn’t have much in common other than that they were both from Japan and were popular with the young. Probably not one of the twenty or so musicians from Japan were active fans of anime: seeing all the cosplaying youth, a member of Swinging Popsicle asked, how come no one is dressed up as Doraemon, or Atom (Astro Boy in the U.S.)? And if the anime fans had their choice, they probably would have preferred to watch a heavily-made-up, big-haired visual-kei group rather than these understated indie rockers.

In spite of that, the shows were a success, no doubt much to the relief of Steve Laity, the guy behind JapanFiles.com, who brought the bands over from Japan for Fanime (whose organizers were looking for a form of Japanese music entertainment at the convention that was a bit more affordable than some big-name visual-kei band).

Two of the three shows were held in a depressing, fluorescent bulb-lit meeting room of the sort usually used for a business presentation. The sound was lousy. But the room was packed both days, and the crowd was a squealing, head-banging, devil-horn waving mass of enthusiasm. In fact, for once, it made me a bit proud of my fellow Americans. Listening to these bands for the very first time, these young anime-worshipping fans, with little exception, appeared to intuitively grasp the structure of songs, knew where the songs would climax, and where they should let out their rock ‘n’ roll roars and screams. Rock music was in their blood. “You are the greatest audience in the world!” bassist Hironobu Hirata of Swinging Popsicle said at the end of one of their shows, and I think he meant it (and he got even more cheers for that remark).

Of the six bands that played at Fanime, Swinging Popsicle seemed to be the only ones who had at least a few previous fans. With their crisp, heartfelt performances at the convention, they made new fans of their melodic, sometimes jazzy pop music. All 80 of their CDs they brought with them to the U.S. sold out by the second night. And whenever they walked through the convention floor, new fans, some in Lolita uniforms, rushed over for autographs and photos together. 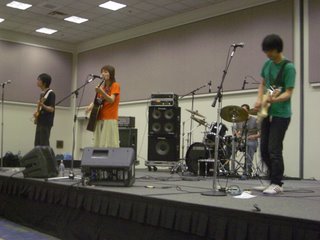 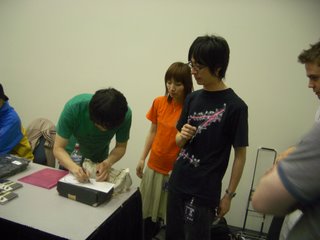 I liked the five other bands too, comprising Mothercoat, Goofy Style, Up Hold, Miami and Poplar, but the last two I thought were especially interesting. Miami was a two girl electro-pop unit, with one of the girls playing classical violin, and were like an underground Puffy or Halcali. At the big Civic Auditorium show on Saturday night, the girl who doesn’t play violin caused much consternation among the auditorium staff by whacking the crash cymbals of the drum set with her mike, and standing up unsteadily on a table to play her sampler (the photo at the top).

Poplar was a trio that featured: a rapping Japanese guy; a girl in a kimono who wailed melodically; and a guy in a bright red Mexican wrestler’s mask who did guitar solos. Their songs used traditional Japanese scales, lending them an exotic Asian feel. 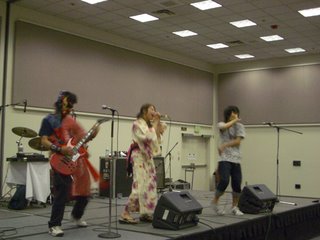 Surprisingly, the most popular of the six bands turned out to be Mothercoat, one of the more eccentric acts I’ve seen in Tokyo (its vocalist stumbles around on stage as if in a straitjacket). I guess it was their virtuoso instrumental playing and wild stage antics: at the Civic Auditorium show, the singer jumped off the stage at one point, and was chased by a couple of over-protective staffers as he ran a lap around the audience. At the end of that show, a long line formed to get autographs from him, a sight one would never see back in Tokyo, because, well, they aren’t THAT popular over here. 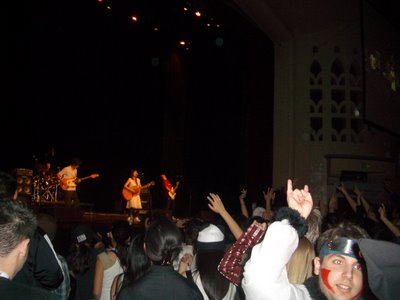 I flew across the Pacific Ocean to take part in Fanime, but I exchanged very few words with its actual anime-loving participants, and I figured there was probably little common ground between us. I couldn’t see myself getting into the mildly Lolita-erotic, offbeat humorous, brightly colored world of contemporary anime. The cosplayers, in particular, were true weirdos, in the way that Trekkies at conventions are weirdos. Still, I felt sympathy for them. Every once in a while, outside of the convention center, where a constant stream of costumed anime fans walked between their hotels and the convention, there would be some redneck in a passing car, who would yell out a quick insult to the anime fans, as rednecks do. It was the same sort of epithets hurled at punk rockers in an earlier era, or at any group of people who have tried something new and different. Maybe there was going to be some great new thing to come out of this scene, and in the meantime, the convention was a place for like-minded people to meet and party day and night (which they did). At least I knew that many of these guys have good taste in music. 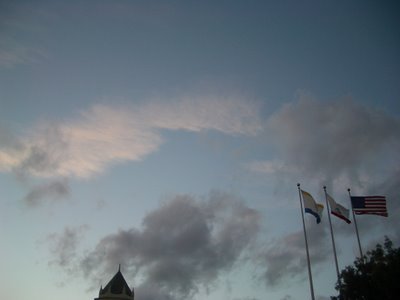