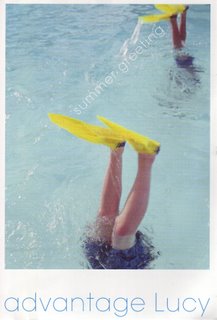 A long time ago, before iTunes and MP3s, before even CDs were invented, in the Era of LPs, there were record rental stores in Japanese cities where kids borrowed LPs to take home and tape. In Tokyo in the 90’s, one of those stores, called Janis, helped create a music scene.

Janis was one of the few (the only?) stores in Tokyo that stocked LPs by bands like the Smiths, Aztec Camera, Prefab Sprout and other New Wave and neo-acoustic artists. Guys like Keigo Oyamada and Kenji Ozawa, who formed the influential band Flipper’s Guitar and helped launch the Shibuya-kei scene in the 90’s, devoured Janis’ Ochanomizu store catalogue. They also left notes on comment cards on albums explaining what the music was like and whether it was good. These notes were the guiding lights for aspiring Tokyo musicians in the 1990’s trying to get a full view of all the good, new music coming out of Europe and North America at the time.

One of the kids who frequented Janis was Yoshiharu Ishizaka, advantage Lucy’s guitarist and composer of its music. He said he bicycled down to Ochanomizu from Adachi ward, a one-hour trip, to rent records at Janis. Then, after going home and taping a record, he sometimes took ANOTHER trip to Ochanomizu to return one record and borrow another, listening on a Walkman to the just-recorded album on the way and back.

Can you imagine, all those hours of bicycling to get one metal tape of a rock album? It’s hard to in these days of instant music acquisition through the Internet. But still, I can understand that willingness to spend hours to find a new work by some musician, who, to you, is the most mysterious, coolest, most perfect musician there ever was.

Another friend of mine, DJ Kamaage, also rented records at Janis, but not at the Flipper’s Guitar hang-out Ochanomizu shop, and instead at one in Ikebukuro. There, there weren’t all the Flipper notes to help make renting decisions, so DJ Kamaage said he picked records based on how the covers looked, thinking that if the album art was classy, so must be the music (a reasoning I believe has an element of truth to it). The end result was that many customers at the Ochanomizu store developed a musical taste in line with Flipper’s Guitar’s, whereas the tastes of the regulars of other stores were more varied.

Janis still exists, but as a CD rental store. The above entry is based on a conversation I had over drinks, and I never personally went to any of the Janis’s, so I’m not sure if I got it completely right, and would appreciate it if you would let me know if there are any things to add or correct.
Posted by Ken M - Japan Live at 6:39 AM