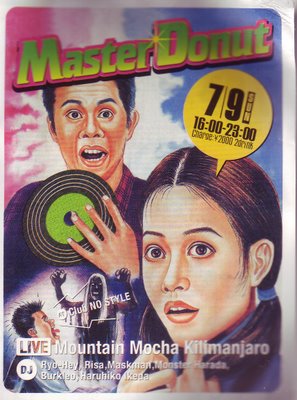 I love so many things about this tiny flier, the size of a name card, that I picked up at a club somewhere in Tokyo.

First off, there are all the funny characters: it's not clear why the girl in ponytails and the guy holding a single look surprised, but in the case of the guy on the bottom left, there's no mystery--I'd be pretty terrified too if I woke up to find a black demon banzai-ing over my bed.

Then, there's the fact that the band performing is called Mountain Mocha Kilimanjaro.

And that the event itself is called MasterDonut. Why? The backside of the flier explains that this is a "cult party" where DJs spin only 7-inch funk, soul and jazz records, Mountain Mocha Kilimanjaro plays, and--oh here it is--during the event donuts are provided free of charge, and audience members can eat as much as they please.