Hello Again, Supersnazz (At The Shelter) 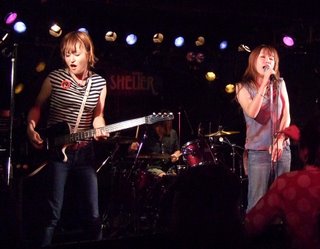 After Supersnazz crashed into my life like a hell-flaming meteor at the Loft, I went out and bought all of the band’s CDs I could find: I got two albums of theirs that are still in print, Invisible Party and Rock-O-Matic, and bought used copies of Diode City, The Barba Rockets Patrol, I Wanna Be Your Love and The Devil Blues Youth. For a few weeks my musical world consisted almost solely of their fast, sweltering girl garage rock. The last time I saw them all of their songs were new to me, but when I caught them at the Shimokitazawa Shelter on Saturday night I knew almost all the tunes and in addition I had invested in them emotional significance (such as, ‘this song I listen to when I need a lift’, etc.).

Supersnazz got its start as a four-girl band in 1990, and in a decade and a half has toured all over Europe and the U.S. and once recorded with Sub Pop. What a terrific group they are. During the Ron Ron Clou set before them, the two current female members, singer Spike and bassist Tomoko, peeked out nervously from the dressing room, checking to see how many were in the audience. They continued to look stiff as they set up on stage. But then when the house lights went down and the show began, suddenly they were different people—rockers who had knocked out audiences hundreds of nights, and were ready to do so again tonight.

The fans raised their plastic cups of beer in a toast to the band, and repeated that during climactic moments in the songs. Spike, the singer, coughed painfully throughout the gig, a result of a bad summer cold, but never stopped shouting out the words to their pop-punk songs. One of those was a great tune called “Shelter” from the album Invisible Party, and listening to it at this cramped, dark club with the same name as the song, I wondered whether that’s what it’s about. Listening to it again at home, it seemed possible, with English lyrics like “I’m shouting/ I’m turning [?]/ I’m headless in the Shelter/ I’m crying/ I’m smiling/ I’m dying in the Shelter/ I just can’t walk on by tonight…”.

They are releasing an album of cover songs in October, and did a few of those, revealing their influences: they covered the Replacements and X, as well as “Brown Sugar” by the Stones (on a related note, the guy guitarist had a tattoo on his biceps saying ‘MC5’).
Posted by Ken M - Japan Live at 6:31 AM