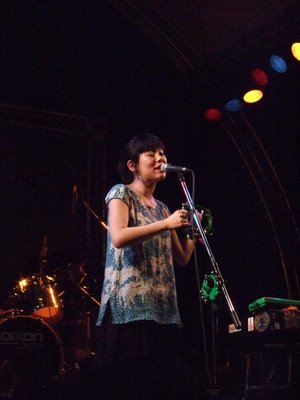 That’s what everyone calls advantage Lucy for short.

When the Japanese say it, it sounds like ‘Loo-shee’. Friends of the Japanese band also say ‘Lucy’ when they are talking about its two members, singer Aiko and guitarist Yoshiharu Ishizaka, like, ‘Lucy is staying at that hotel.’

I followed Lucy and another Japanese unit called Three Berry Icecream to Taipei to see them play at the Formoz music festival. For a long time I’ve wanted to visit Taiwan anyway, and thought this would be a good opportunity.

Taipei was hot and the sunlight strong, and many shopping streets had arcades to avoid it. Walking in town, sometimes out of nowhere came the smell of burning incense and herbal medicine. At temples and shrines, people bowed holding lit incense above their heads and tossed red crescent-shaped tablets to the ground to tell their fortune. It seemed to me that traditions lived on in Taiwan that had largely died out in mainland China because of the communists.

The festival was in a big children’s recreation park filled with ponds and pavilions and Chinese-style houses. Once the sun went down, bands from Taiwan, Japan and elsewhere performed at stages named after natural elements—wind, fire, stone, etc. 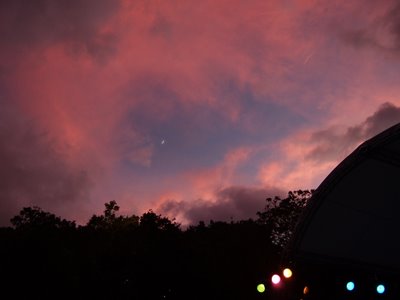 I saw a Taiwanese band called 悲情土台客 (which I guess means something like ‘the sadness of the Taiwanese’?). They were an interesting bunch: the guitarists all had little flags on their guitars, and they had up banners in Chinese characters. They did songs that sounded like canto-pop, and the singer told jokes between numbers in Taiwanese, which of course I didn’t understand. Someone told me later that they aren’t a full-time band but rather a gathering of various well-known musicians.

Other than them, I wasn’t able to spend much time seeing the many local groups at the festival, for various reasons, and that was my only regret about this Taiwan trip. I really only saw advantage Lucy and Three Berry Icecream…maybe next year. 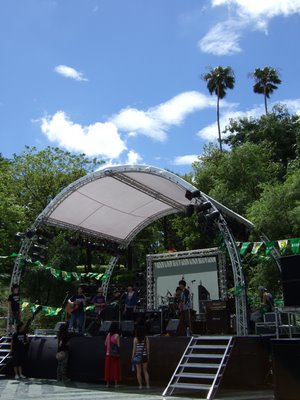 Three Berry and advantage Lucy both played at the Electric stage, which was next to a pond where carp swam. It was also next to the bigger Wind stage, where all the top acts performed, and because it directly faced Electric, at times it was a battle of noise between the stages. Three Berry plays gentle, semi-acoustic pop and was competing with the Taiwanese rock band 1976 next door; it lost the battle. During Three Berry’s first few songs, 1976’s hard rock was always in the background, and you had to make an effort to distinguish Three Berry’s accordion, glockenspiel, viola, bossa nova guitar and piano sounds. But the audience did and liked what they heard, and the 1976 set ended about midway into the gig so the second half was quiet, and the happy crowd asked for an encore. 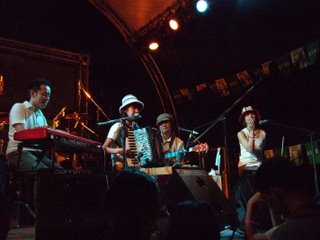 I had heard there are advantage Lucy fans in Taiwan, and at Formoz I saw them for myself: the crowd roared when the band went on stage around ten in the evening, cheered again when the band played a few warm-up notes, thinking the show had begun, roared when singer Aiko hit the stage, and cranked up their cheering to maximum volume when the performance finally began with the song “Red Bicycle”. During some of the songs, incredibly, the Taiwanese crowd sang along to advantage Lucy’s Japanese songs, and I did too, utterly moved. 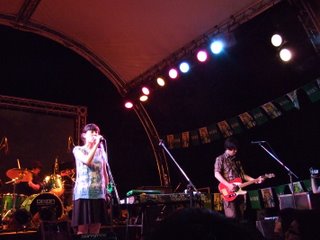 The Taiwanese reaction to the Japanese bands was a great thing to see. I’ve lived in China and studied its language, and was happy to see Chinese-speaking people discover and enjoy Japanese bands. Another thing was that for historical reasons and other reasons, the Chinese and Japanese haven’t gotten along, and it seemed like something that gives hope to see they could at least dig each other’s music.

After a wonderful set, Aiko and Ishizaka sat down at a table and started autographing CDs for fans. A lengthy line formed of fans who waited to get autographs, shake hands and take pictures together. The two must have been there for an hour or more, after a long day and a performance. This was amazing for me because I had heard that Aiko wasn’t in the best physical shape when she left Tokyo (she wore boots to hot Taipei because she was worried about the air-con) and knew she must be tired. In fact, during their time in Taiwan Lucy spent a lot of time in the hotel and didn’t even hang out much with Three Berry Icecream, who are some of their closest friends. One of the evenings I had dinner with them, but they must have been thoroughly exhausted at that point—at the restaurant the group occupied two tables, with Lucy and the other Japanese at one, and the Taiwanese at another. There was little interaction between the two sides, and it made me a bit uncomfortable to be there, like I was peeking behind the curtains at something I shouldn’t see backstage. But it sounded like at other times there was much more friendliness so that on the final day at the airport, lots of tears were shed.

A thing I missed that I regretted was an “After-Party” show at a club called the Wall the day after the Formoz festival ended. There, Lucy sang their one Chinese song, ‘The Season Of Apricot (杏の季節)’, and the audience apparently sang along in a grand chorus. Damn, damn, wish I could have been there!
Posted by Ken M - Japan Live at 5:06 PM