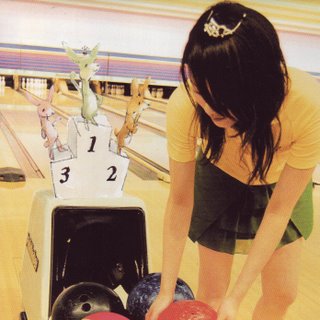 One is Guitar Pop Grand Prix by Spaghetti Vabune. This strangely named sextet from Kobe has been growing in popularity, and I’ve been a fan of their ultra-catchy pop for a while. But their latest album took me by surprise: while their debut effort Summer Vacation, Sunset Vehicle was good, this second album of theirs marks a quantum leap in artistry. It’s my favorite Japanese album so far this year.

Opening with an anthemic declaration of their musical loyalties, ‘this is guitar pop!’ (‘this, is, guitar, pop, and you love I love guitar pop’, the song goes), the album runs through one after another bright and upbeat tunes that stick in the mind. Spaghetti Vabune songs are instantly recognizable because of their girl-guy twin vocals: neither is in any way an accomplished vocalist, but that’s part of the charm of this band. The female singer Chee’s style in particular is distinct, a warbling, nasal voice that seems to come out of the corners of her mouth—it’s probably an acquired taste, but one that you get hooked on once you do acquire it. Overall, the album is more bass-heavy than the lighter debut album, and the songs are lined up in a more focused way, to progressively jam up the listener’s voltage. The only shortcoming I can think of is that Spaghetti Vabune’s songs don’t have much variety: they’re all fast, energetic, sunny pop songs. But maybe that’s the Spaghetti Vabune sound, and moving away from it will make them a different band.

I also like Guitar Pop Grand Prix for its colorful art and design, all created by singer Chee, and for the fact that the lyric sheet includes chords, in case you want to play the songs yourself. 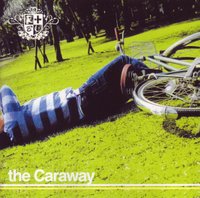 The other nice album is the self-titled debut CD of the Caraway, the trio led by Swinging Popsicle guitarist Osamu Shimada. Shimada is a connoisseur of American and European indie pop and rock, but his biggest love is the Beach Boys, which he says he listens to every day. And, indeed, this album from perennially overcast Tokyo is California sunny in sound, every tune joyful (Shimada plays for several bands, but he always seems to be having the most fun when performing for the Caraway). Shimada sings in all the songs but one, ‘Dislike You’, in which keyboardist Miyuki Yoshida does lead vocals, and it’s a good change of pace. Shimada says the band will be featuring her singing more in the future, something that will make their sound richer.

I’m listed in the ‘thanks’ list of this album, by the way, partly because, for reasons I won’t get into, I provided the band with a childhood photo of myself…

*Guitar Pop is a hard-to-define musical genre that I haven’t seen mentioned much outside of Japan. Think the Cardigans and Smiths.
Posted by Ken M - Japan Live at 7:09 AM