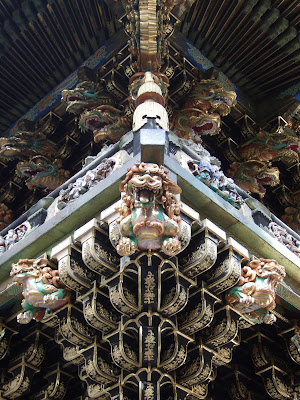 Do the Japanese have a unique ability to enjoy the singing of autumn insects? It's something people say around this time of the year. I have no idea whether it's true—I'm a connoisseur of these evening insect sounds, but then again I've been in Japan for so many years that I'm definitely 'turning Japanese', and have no idea whether that's normal...But really, I do think there's something haunting and musical about the repeated calls of bell crickets and other insects in autumn nights. As Madame Sei Shonagon said, the evenings are the best part of autumn.

I got to thinking about bug noises during a trip to Nikko, where I stayed at an inn that had an outdoor hot spring bath which, in the silence of the night, became something like a concert hall for crickets.

Despite my more than a dozen years in Japan it was my first time in Nikko, in one of those, 'I live in Paris but have never been to the Eiffel Tower', or 'LA's my home but I've never been near the Hollywood Walk of Fame' deals, where a place is such an obvious destination to visit that you assume you will make it there eventually but don't.

In any case, Nikko is famous for the Toshogu, the shrine for Tokugawa Ieyasu, the founder of the Tokugawa shogunate. It's a gaudily-decorated, gold-filled building complex, quite unlike the 'wabi sabi' understatement of other major Japanese shrines and temples. At the local bookstore I picked up a book called “The Mystery Of Toshogu” which I read in my free time, and it had some fascinating explanations and theories about the shrine.

One of those was the issue of why Tokugawa Ieyasu, a warlord, was able to be made a 'god' by his descendants and to be enshrined in Nikko. The book said that in Japanese history, it wasn't unusual for someone with exceptional ability to be venerated as a divine being after his death; even the Shinto gods were thought to have started out as humans. One problem is that the word 'god' may be a somewhat misleading way to translate the Japanese term 'kami'—the Japanese word has more the sense of an extraordinary natural phenomenon, rather than an all-powerful creator of the world (and, in fact, big natural things, like mountains, have been worshiped in Japan as 'gods').

Tokugawa, as someone who was able to bring to an end the warring states period (even if on the coattails of his predecessors Oda Nobunaga and Toyotomi Hideyoshi) and launch an enduring era of peace, was worthy of becoming a god. In fact, he actually put it in his will that he wanted to receive that divine status, choosing to stay in this world, in Nikko, to make sure everything's going fine, rather than taking it easy in the Pure Land Paradise. Which, to the modern reader, seems like quite picky and ambitious directions on how to spend the afterlife...

At Toshogu, there are many sculptures that symbolize the peace that Ieyasu brought about. There are sculptures of the kirin, pictured on the label of the beer of that name, a hooved mythical creature that only appears when a sage is ruling and hides away when a tyrant is on the throne. There's also the baku, a creature with an elephant-like trunk; it eats nightmares, so samurai lords had it illustrated on pillows. It also eats iron, and when there's war and the metal is taken away to make weapons, it goes hungry. It too is, therefore, a symbol of peace. The Youmei gate in Toshogu has sculptures, in addition, showing scenes of children playing—something they could only do in peaceful times. 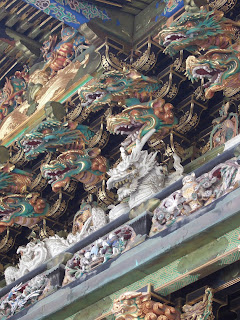 The book also talks about why Nikko was chosen as the site of Ieyasu's main shrine. To simplify the argument, one significance of Nikko is that it's directly north of Tokyo, the home of the Tokugawa shogun. A northern position was where the protector of people traditionally resided—ancient Chinese and Japanese palaces were on the northern end of towns. A ruler in the north has his back to the northern pole star, which hardly moves in the sky, and lends to him its unmoving stability. In any case, by being enshrined north of Tokyo in Nikko, Ieyasu would be able to look over his descendants as a divide protector. 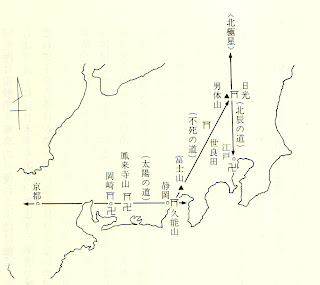 Ieyasu was actually buried at first in Kunouzan in present-day Shizuoka prefecture, before his remains were moved to Nikko, in line with his will. The book says this is noteworthy because on the diagonal line between Kunouzan and Nikko is Mount Fuji, and 'Fuji' is similar in sound to the Japanese word for 'undying', 'fushi'—the path between Kunouzan and Nikko may have symbolized the passage of Ieyasu from living to divine status. Kunouzan, for its part, might have been chosen because directly west of it (following the path of the sun, an important object of worship in Shinto) is Ieyasu's birthplace, and going further, Kyoto.

Who knows whether this stuff is on the mark, but it's interesting to think about it while seeing the sights of Nikko. 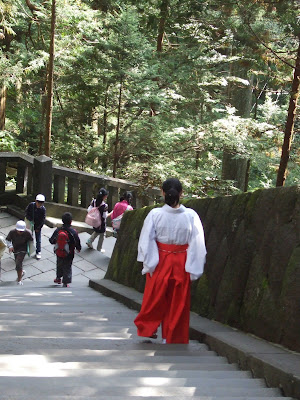