Commenter san told me about this Halcali video for their song "Girigiri Surf-Rider" and I thought it was the greatest thing and watched it about 50 times in a row, but then when I told a friend about it, she didn't really get it.

So, maybe a few words of explanation are in order. First off, obviously it's a parody of "Beat It". But the gangs are girls rather than guys, and the first ones, seen in the cafe, look like suke-ban, with their long hair and exaggerated school girl uniforms. 'Sukeban' is a combination of 'suke', a derogatory term meaning 'woman', and 'bancho', school toughs.

The group that clashes with the sukeban I thought at first was supposed to represent Ladies, but now I'm not so sure. Ladies are the girl counterparts of the bosozoku, motorcycle gangs, and the ones in the video looked like they were in a biker-like get-up, but when I google imaged 'Ladies', the fashion was different--long, loose, primary-colored coats and pants--so maybe that's not what they are, and they either represent a delinquent subculture I'm not aware of, or the video creator just dressed them up that way to create a vivid contrast to the sukeban that would suggest the two groups aren't the best of friends.

The climactic show-down happens in a container port. First to attack is the biker jacket girl, flinging a couple of darts. The sukeban chief blocks those with her school bag, and you'll note that on the bag is a sticker saying "Namennayo"--don't treat me lightly. This alludes to the Name-neko, kittens in bad kid school uniforms that took the islands of Japan by storm in the early-80's (as seen below). 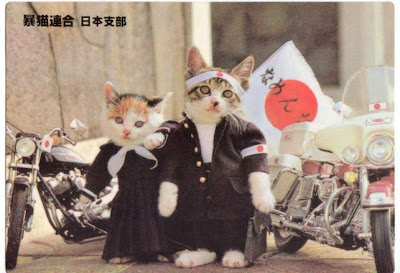 After a group dance battle, just as the duel between the two gangs' leaders is about to turn serious, Halcali stumble over to save the day. All they need to do is show them the moves to the Girigiri Surf-rider dance, and then peace will reign in this teenage town, with former rivals getting down together. As one YouTube commenter put it: "halicali can stop all conflicts with the power of dance". Go Halcali!
Posted by Ken M - Japan Live at 7:10 AM