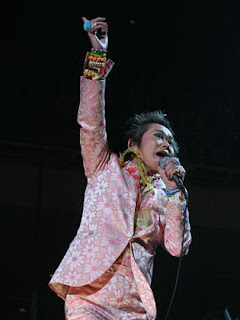 So Kiyoshiro Imawano has left us, only 58, to jam on a stage somewhere with Elvis, Lennon, Kyu Sakamoto...

Kiyoshiro's band, RC Succession, introduced me to Japanese rock 'n' roll 20 years ago. My teen heart was thrilled by the most thinly-veiled sexual innuendo imaginable in their hit “Ameagari No Yozorani (To The Night Sky After The Rain)—along the lines of, the car batteries are charged, so why don't you want to go for a ride? I also listened to their live cover of “Ue Wo Muite Arukou” (or, Sukiyaki), before I discovered Kyu Sakamoto's original. Having been exposed to lame Japanese top-10 songs all my life, RC Succession's Japanese rock sounded so fresh and ground-breaking, during those young days of first beers and mischievous cigarettes...

When I moved to Japan, quite by coincidence my first apartment was near Tamaranzaka, the slope in western Tokyo that is the name of one of their famous songs. Around me were young guys who grew up listening to RC Succession—they were proud Kiyoshiro was a native son, and his music was real to them, including that bittersweet love ballad “Tamaranzaka”—it was everyone's secret song.

We always laughed at the lines in “Transistor Radio”: “I yawned so much in class, my mouth became big/ I napped so much, my eyes turned small”. When he's not bored in class, he listens to music from the Bay Area and Liverpool on the roof of his school.

And now he's gone. Truly, as a line in “Transistor Radio” says, I've never been able to explain this feeling well...So I think I'll leave you with a few of his videos instead. Goodbye, and thank you, Kiyoshiro.