A Jazzy Advantage Lucy At The Que 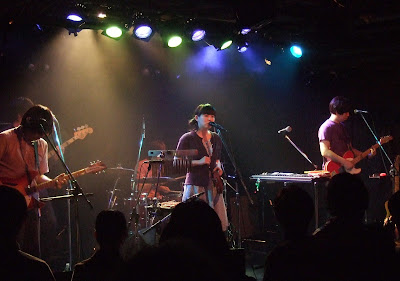 Advantage Lucy played a couple of news songs at their Que show on Friday night, including a tune called “Teacup Ride”, and they had a jazzy feel, with swinging bass and drums. Aiko swept her fingers through a chime tree at climactic moments to color the music with glissandos.

It was an interesting new genre choice—the sort of jazz you might hear in a lounge—for a band known mainly for its sunny indie pop tunes. But I've always thought it's a misconception to think of advantage Lucy as just an upbeat guitar pop group—one listen to the longer, more complex tunes of theirs such as “Shiosai” from Echo Park, or the single “Photograph”, or “so” from Fanfare, etc. etc., would likely alter that view of their sound. They're a musically adventurous bunch.

Advantage Lucy are also masters of the pop ballad form. How many times have I listened to, and how much has my life been made richer by, pure gems such as “Koko De Oyasumi”, “Today” and “Nico”*? Ballads like those are miraculous unions of the most beautiful melodies and unforgettable lyrics. After so many listens, I'm still always moved by these lines in “Nico”: “Moshi kotoba ga hoshi yorimo/ kazoe kirenai hodo arunara/ tsutaerareru kamoshirenai kedo/ sonna taisetsu na mono dewa nai to omou (If words were more countless than the stars in the sky, maybe then I'd be able to let you know how I feel, but then I think it's not that important after all)”. At the Que show, they played the emotional, nostalgic ballad from Echo Park called “A Distant Day” (there's a Youtube video of the song here), and it was a gorgeous rendition as ballads usually are when they perform them live.

By the way, totally unrelated, and a bit in the past now, but this 'toy music event' described in Patrick's chipple.net sounded like a lot of fun. Great report and colorful photos!

*“Koko De Oyasumi” and “Today” were B sides on their singles Memai and Hello Mate!, respectively, and they are also available on the best hits collection Have a Good Journey. "Nico" is in Lucy Van Pelt's Advantage Lucy EP.
Posted by Ken M - Japan Live at 9:09 PM