Japan-Kuruu-Special & Asakusa Jinta At The Loft 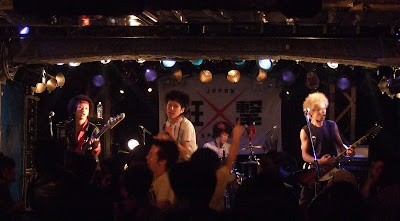 I knew Japan-Kuruu-Special was a band worth checking out when I took a look at their website, the funnest I've seen in a while.

It parodies a sports tabloid, with eye-catching primary colors. Where the breathless, huge tabloid headline would go is an announcement that Kuruu is going on a national tour. The cover art features four bosozoku-looking guys with gigantic pompadours and afros, astride an old Japanese automobile shooting out from the Rising Sun (and there's a fineprint in the corner saying, 'Note: We're not actually bosozoku [biker gangs]).

Their profile page is headlined, “Not Again, Osaka! Japan's Most Powerful Violent Music Organization Is Formed In A City-Run Slum Housing Project”. In the corner is a picture with the caption, “The Osaka city-run housing project where the incident occurred”. Taking up all the left part of the page is, as if introducing secret pictures of notorious gangsters, another headline saying, “EXCLUSIVE: Pictures of the four members!!” The drummer, whose afro is bigger than his face, wears one of those ominous surgical masks that bikers are said to wear with a red line cutting through the middle.

Anyway, Kuruu was on tour and playing with Asakusa Jinta at the Shinjuku Loft, so I headed over. It had been a while since I last walked through Kabukicho on a Friday night, and I lapped up the town's erotic, drunken, seedy, money-hungry energy, the hostesses in their dresses, the hosts with their long locks and shiny suits, the real and phony gangsters. How many other towns are there like this in the world, this Far Eastern Sodom? Maybe it's the recession, or maybe it's a reflection of Tokyo's increased internationalization, but several touts invited even me, an obvious gaijin, for an evening of flirtatious conversation in cabaret clubs. Ignoring them, I walked down the stairs to the Loft in a building whose every other tenant appears to be a girl bar or red light establishment of one sort or another.

Kuruu lived up to their “exclusive” photos: they did have monstrous poofy pompadours and afros. They were like a cross between the Ramones and Carol-era Eikichi Yazawa. The singer, Junzo, stood nearly the whole time at the center with one leg permanently on the stage speaker, and he went through every cliched rock gesture there was, but since he did a new one on every single beat, twirling the mike stand on one beat, doing a clenched fist the salute the next, kicking the air the next, etc, it was great fun to watch. In front of them in the audience section was spirited slam dancing, including a few guys in business clothes, maybe letting off some steam after a hard day at work. This was a good band—Junzo said between songs, in a joke-filled, earthy Osaka dialect, that they're aiming for the Budokan. Who knows whether they will make it there, but these guys might become popular.

It had been a few weeks since I last saw Asakusa Jinta and when I heard Osho slapping the bass while setting up for the show, those precise sonic explosions, it came back to me what this band was all about. His bass comes down like bomb runs, destroying our day's banalities and boredom. And the band's music, a beautiful fusion of hard rock and horns and old Japanese popular music, illuminates something inside me I'd forgotten about.

Their latest album and title track are called Setsuna, which is a Japanese word meaning the briefest moment of time. It's actually a Buddhist term—according to trusty Wikipedia, it comes from the Sanskrit word ksana, and if you divide one day by 30, and then divide that again by 30, and then divide that by 60, and finally divide that by 120, you get a setsuna. So one literal school of thought says that a setsuna is 1/75 of a second, but another denies this, saying that you can't measure it.

The period of time watching Asakusa Jinta is always a pleasurable one. These guys are professionals of entertainment, proud shokunin, artisans, of music, and they are committed to making the show fun for the audience. The 30 minute shows like these are dense in content, but go too fast, though maybe that's because this is another sort of setsuna, just a blip in the long flow of time. 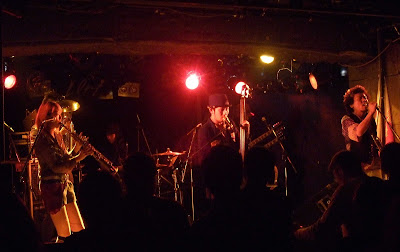