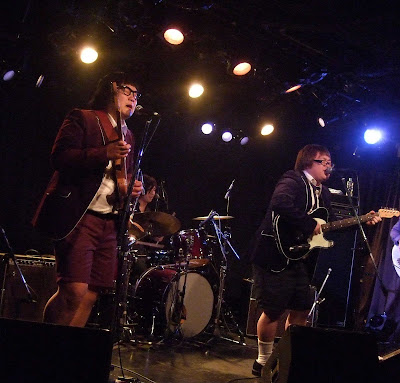 Strange how standing on the concrete floor of the Que can feel sofa-like, at a pal's pad, when there's good music. 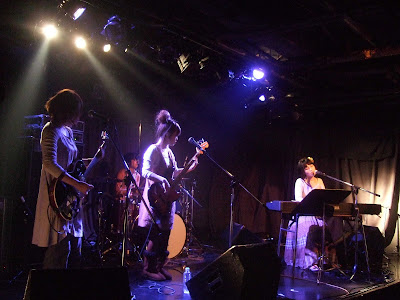 And there was, including Contrary Parade. Their drummer always sends me invite emails to their shows when they come in from Osaka. Now they're all moving to Tokyo, so I'll be able to see more of them. Contrary Parade sounds to me post-Waffles, which for its part is probably a post-advantage Lucy band. I like the way the three girls at the front of the stage (they're all girls except the drummer) giggle elegantly during breaks between songs.

Ashigaru Youth, also from Osaka, featured two male vocalists/guitarists with full cheeks, double chins, and round stomachs (photo at the top). 'Ashigaru' means a samurai foot soldier, but its literal meaning is 'light-footed', which may be ironic in this case. But the duo sang beautifully, and the band's power pop was pleasing. Their girl fans were lined up in front of the stage, dancing along to their songs. I may have been affected by a beer and a glass and a half of whiskey and soda by then, and though it might have partly been flattery to the venue, even so I was touched when they said they've dreamed about playing at Shimokitazawa's Club Que and were therefore very excited to be there.

Wrapping up the event was Plectrum, a great band I wrote a lot about when this blog was getting started. I eased off on the reports on them after a while even though I continued to see them, just because I'd said so much already. But seeing them tonight reminded me that when they start playing it can be space warp-like and I'm in a place where time is filled with pleasurable music action. I remember why I was so crazy about them. Fourteen years as a band, and they were probably good to start with. And it feels very worthwhile that they are making music like this. Times like that, the real message I want to send is: there was something there. 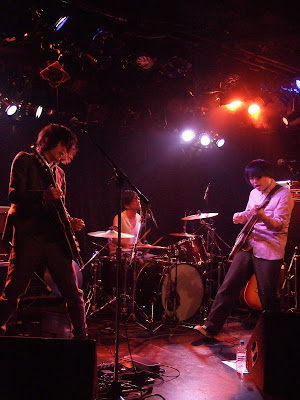