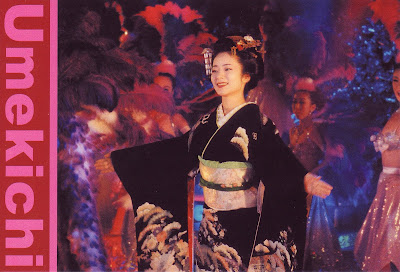 Not sure what it was but when Umekichi came on stage in her light pink kimono and started a traditional dance, my eyes started watering up, and they didn't dry during the first few songs. It happens sometimes—perfected art makes me emotional. And Umekichi's dance—confident, flowing, graceful, and bearing the weight of centuries of tradition—was indeed beautiful.

I've written before about Umekichi, a singer of old popular tunes and geisha songs. The last time I saw her was in an auditorium, but this time the venue was more intimate, a live house in Daikanyama with the unusual name of Haretara Sora Ni Mame Maite, which means, 'if the sun comes out, toss beans at the sky', apparently a line from a poem.

It's a small hall with aboriginal-looking illustrations of branches and vines on the orange walls, and in the back is an elevated stage with a red umbrella where audience members can sit on the floor. The crowd was a mature one, mostly over thirty, many gray hairs, and 'around-forty' ladies who drank draft beer. But there was also one little girl who shouted a big 'Hai!' when Umekichi asked if anyone had come specifically to see her. 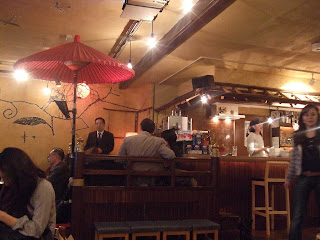 Umekichi's show was like entertainment from another era, less self-important about the music, more of an effort to make it feel like a casual gathering, even though the professionalism was obvious. The songs, accompanied by the shamisen and the sparse beats of the taiko, were mostly over in minute or two, and the singer filled the rest of the time with talk, elegant, humorous, sometimes mildly flirtatious. Umekichi often does her sets at rakugo theaters, and her act reminded me of the spirit of that storytelling art: be an artisan of words, giving it your best effort to put the audience at ease and to get them to have fun.

The event also featured a genuine rakugo artist, in addition to a woman who played what might be called koto jazz. The rakugo guy was the 28-year-old Kichibo Katsura, a practitioner of Osaka-style rakugo. I'm no expert, but it seems that rakugo has always been big in Tokyo and is making a come-back in Osaka. Rakugo is a spoken art so knowledge of Japanese is probably needed to enjoy it, but if you know the language, it's great entertainment. It's uncanny the way that when reciting a comedic rakugo tale, just one man in kimono sitting on a cushion can play multiple roles and seamlessly switch between one character to the next solely with a turn of the head, a slight change in expression, an adjustment of the voice. Kichibo had that down. But I think it's a deep art—how could it not be when you're expected to keep an audience interested and laughing with just your words—and I got the feeling that to really master it, to learn to draw the crowd into the tale and to lead them to that ultimate, sublime rakugo punch-line, is something only decades would bestow. 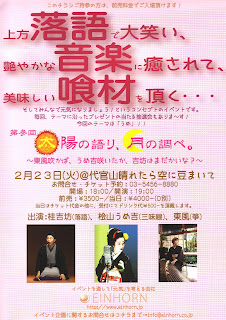