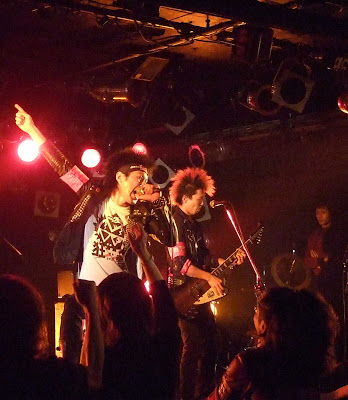 I remember a few years back a Korean all-girl band played in Tokyo, and even though their show was excellent, they looked unhappy later, because they thought the audience didn't enjoy the show that much. And I tried to tell them that wasn't true, the crowd did have a good time, but Tokyo audiences tend to be on the shy and quiet side, and so their enthusiasm might not have been obvious. I don't think they were convinced.

I was reminded of this episode watching Japan Kuruu Special for the second time, this time at the Club Phase in Takadanobaba. Kuruu is an energetic, lively, comedic Osaka band. They do things to an excess, including their huge hair-do's, and the non-stop stage action. It's great entertainment, and it seemed to me hard to imagine people who wouldn't like it, but the Club Phase gig revealed that those people do exist.

There was an insider-outsider thing going on, something I've often seen at live houses. At the front near the stage were the inside people, almost all girls, a fun bunch that sang and danced along to the songs, and occasionally got into a sort of joking, non-violent slam dance. But a few steps behind them, toward the back of the small hall were the outsiders, who didn't know Kuruu, and when I glanced back their expressions varied between mild amusement to apathy. I can't read minds, and possibly some of them enjoyed the Kuruu show, but it did seem like they were biding their time until the more 'serious' bands they came to see hit the stage.

Kuruu are outsiders in any case in Tokyo. They talk and sing in the Osakan dialect. And they have different ideas of what good conversation is—inserting joking exchanges in chats is important for Osakans, but that's not necessarily the case for Tokyoites. So, at one point, Kuruu's vocalist said they would continue playing the same part all night unless everyone in the audience sang along—then, a few moments later, added, “that's a joke; don't take everything we say seriously.” The implication being that Tokyo people don't have a sense of humor.

You also often hear that not a lot of Tokyoites are originally from Tokyo, but that the city is populated by people from all over Japan, whereas most Osakans are really from Osaka. I sometimes wonder whether the regional origins of many Tokyoites account for the shyness of live house audiences, though this is a pretty underdeveloped hypothesis.

This was only my second time to go to the Phase, and I only have dim recollection of my last visit there, probably about five years ago. I don't know much about the town of Takadanobaba either, but I enjoyed the walk from the train station to the club. It's a retro town, like time stopped in 1970, with lots of neon signs in Japanese fonts you don't see that much anymore. A major neon advertisement on the wall of a sinister-looking, dark building was for 'student loans', which I assumed wasn't what you'd usually associate with the term, but instead high interest loans for young students who overspent during their first time away from home, and which the parents are expected to repay. It's a big college student town with many schools, right between sin city Shinjuku and Saitama residents' metropolis Ikebukuro, and also one train stop away from Shin-Okubo, where you get the sensation you are in some other Asian city other than Tokyo, maybe Seoul or Bangkok. The name means the horseback riding grounds of Takata (apparently older Tokyoites pronounce it, presumably correctly, as TakaTanobaba), because that's what was there in the Edo era. 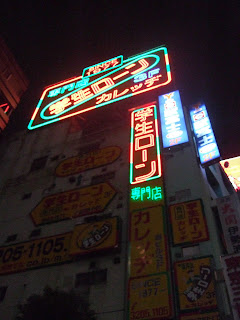