Caraway, Reminding Me Of The Old Days 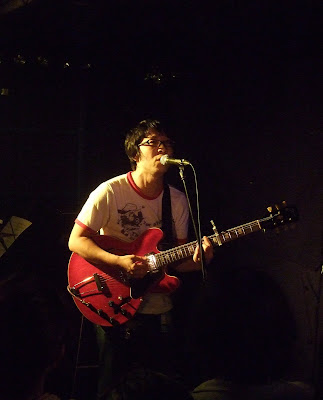 Once in a while there's a show that reminds me why I became so crazy about guitar pop around 2003, almost a decade ago now, when I sometimes went to several events in a week. This time it was Caraway, themselves playing for the first time in three years as a band. They're led by Swinging Popsicle's Osamu Shimada, the Beach Boys-loving guitarist that reminds me a little bit of Buddy Holly because of his spectacles and wholesome looks. Off stage, he is down to earth and polite, with just a hint of a charming mischievousness. On stage he's different, giving it his all, connecting with the crowd with his sound and humor.
The event was Guitar Shop Restaurant at the Nishi-Ogikubo Waver, and the flier for it featured a girl in a white dress, floating in the clouds holding a bunny and a kitten. Over drinks one night before the show, my friend DJ Kamaage and I chatted about this picture, which maybe reflected how a younger generation thought of guitar pop, but didn't feel right to us. Guitar pop isn't just sweet and gentle music. Some of us fans think it's a successor to the original punk rock, trying new things, with a Do It Yourself attitude. Or, as twee.net says, "Pop Kids everywhere know that the true spirit of Punk Rock lives on not in the mass-marketed "alternative" scene, or the sub-metal caterwauling of testosterone-poisoned grunge-rockers, but in the simple and pure efforts of kids banging out sweet delicious songs on cheap guitars. "
A certain feeling of being on edge can be seen in the live shows of bands like Caraway. In a different way, another group on the set that night, Three Berry Icecream, shows the true guitar pop spirit, creating beautiful, short tunes with accordion, viola, xylophone, just because those are the instruments that band leader Mayumi Ikemizu wants to use to create sounds.
This was a 'sold out' event, at a tiny venue I'd never been to before. Fortunately, and unusually for a Tokyo show, the audience could exit and re-enter the venue freely, which was good, because the place was packed. There's a relationship between how much you love a show and how much discomfort you are willing to put up with, and these days in my case the love really has to be there to stay at an uncomfortable event, whereas Tokyo audiences seem to be able to put up better with the lack of space, or maybe they just love the music more. Or, I might just be turning into an old grouch. It was good, though, to be able to go outside and walk around in Nishi-Ogikubo at night, a dense neighborhood of eateries and bars, including a huge yakitori joint called Ebisu that occupied multiple storefronts in one block.
Posted by Ken M - Japan Live at 9:07 PM