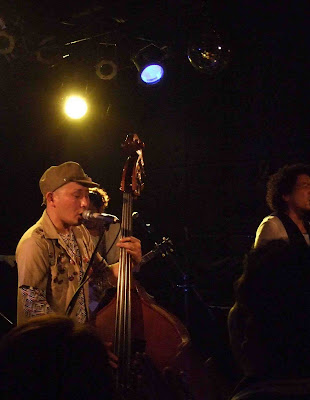 The Kurawood in Asakusa is such a nice live house, with a friendly vibe. I recommend it highly for any music-loving visitor to Tokyo, since you won't want to miss Asakusa in any case (and for that matter, anyone who lives in Tokyo should go too).
Kurawood's bar sells, in addition to the usual beer and cocktails, several types of shochu, sake, Denki Bran--'electric brandy'--that specialty of Kamiya Bar in Asakusa, a liquor that tastes like sugar and herbs dunked into brandy, and bar food, including oden for 300 yen, which is a good deal.
Hung from the ceiling of the stage area are paper lanterns that darken when shows start. They're inscribed with the characters for Sanjya festival, a big annual event in Asakusa.
I headed to Kurawood from Asakusa station, and the evening was autumnal, with a cool breeze swinging the branches of a willow tree next to an old restaurant with a black-tiled roof. The night's show was organized by Asakusa Jinta, so I knew it would be good.
The first group I saw was called OldFashion, an energetic, swinging outfit with three sax players, a wood bass, two guitars and a drummer. Nattily dressed in jackets and ties, OldFashion was one of those groups that was inspired by old jazz and pop. They reminded me a bit of Ego-Wrappin and Crazy Ken Band, and I liked them a lot. 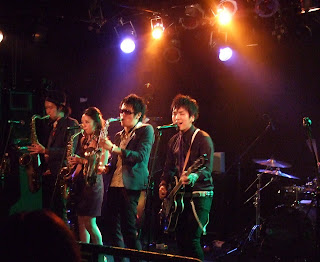 Next up was a funny band led by the 'Mick Jagger of Adachi ward', and these guys really learned their stage show from Rolling Stones 101, complete with a lead guitar with Keith Richards mannerisms.
Then Asakusa Jinta came on, and the floor erupted into joyful dancing. An especially excited kid turned around and apologized when he bumped into me, and I felt bad because his hops and swinging dance and arm pumps were what I felt too, inside. Though by about the middle of the show, the music was so powerful, I jettisoned my inhibitions and joined him and the other fans in dancing.
One of the things that makes Asakusa Jinta great is that they've made music that sounds both retro and new, mixing western and Japanese styles. Others have tried this too, but I don't think as successfully. And they're master performers, fun and engaging to watch. It's a stupid miracle that you can still see these guys right up close at a little place like the Kurawood. 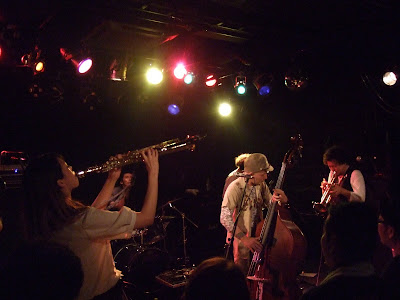