Munekyun Arpeggio At The Que 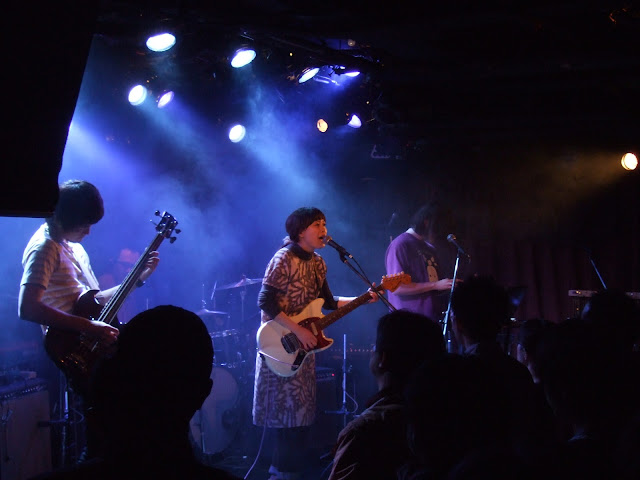 Happy New Year. It's taken me this long to find the time to write about a show on Nov. 25.

It was the ninth Munekyun Arpeggio, an annual event to remember the life of Takayuki Fukumura, the former guitarist for advantage Lucy and Vasallo Crab 75. I thought about birth at this show that came into being because of Fukumura's death.

New sounds were being born. The first band was Bertoia, led by a girl who calls herself Murmur. She'd been an advantage Lucy fan since high school, when she went to see the band in Osaka with her mom. Now she has her own shoegazer group, playing for a packed audience at the Que.

Up until I stepped into the club and heard Bertoia's first note, I was feeling a mental chill--maybe going to this gig was like trying to relive something that had already passed me by. But then the first chord sounded, and the warmth returned.

I'd seen Murmur on stage before, but I saw that she and her band had grown as performers. Once shy and appearing almost afraid, she now looked at the audience, so that she could better tell her story of music. And when I listened later to their album Modern Synthesis that I bought that night at the club, I remembered what they created on stage--emotions melted and shaped into music.

When advantage Lucy came on stage and vocalist Aiko introduced the band, she said there was one other person there--she was almost seven months pregnant. Tiring more easily because of the baby, she still sang beautifully old songs like "When I Sleep" and "Nico" that she once played together with Fukumura. Almost ten years since his departure, a new life was being created--it was sweet to think about the old times those songs evoked and the days that had passed.

The bands made a compilation album for the Munekyun Arpeggio event, and advantage Lucy contributed a song called "Stars". Aiko teared up, saying women in her state became emotional easily, while explaining the song: it's about all those people who are gone, but may be looking over us from the sky. And if the death of one person hurt so much, what must it have been like, after the earthquake, when more than 10,000 lives disappeared? That was the emotion that led to the song's conception.

Last up was Vasallo Crab 75, Fukumura's final band, which he formed with school-buddy Daisuke Kudo.

If Bertoia and Lucy made me think of birth, VC75's music was about growth: from a duo that home-recorded guitar pop tunes a decade ago, VC75 had evolved and mutated into a funky six-piece ensemble that mashed together rock, soul, jazz and classical, always energizing the audience. But I felt that the sensibility hadn't changed, and Fukumura would have enjoyed seeing what the band had become. 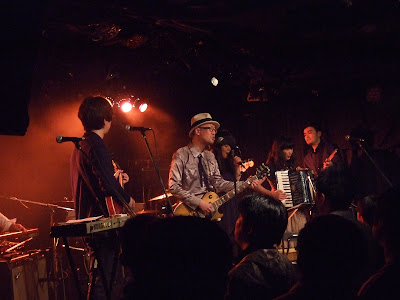 I would love to see an advantage Lucy show again!