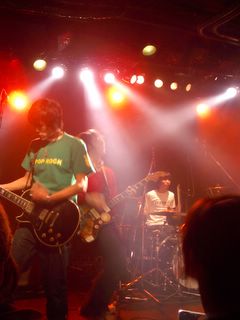 Akira Fujita, a.k.a. Akky, of Plectrum.

Tokyo rock band Plectrum’s Akira Fujita, a.k.a. Akky, is a guitarist of deep talent. A leftie who plays a black Gibson Les Paul, he is highly respected in the local music scene. Akky’s played, after all, for high-profile artists like Chara and Syrup 16g. In person, he’s friendly and laid back, if at times having rock musician idiosyncracies. For example, I asked him once who his guitar influences were, and Akky said, well, I can’t think of anyone really, when I hear good guitar passages on the radio I just try to play like them. Spoken like a genius.

Tonight was, in my mind at least, Akky night. At a show at the Shimokitazawa Club Que also featuring the Burs from Nagoya and SGT, Akky played the guitar for the third act, the Bank$, and the final act, Plectrum. It was one of those nights where I watched a fabulous player like Akky up close in a small club and wondered, why doesn’t he and his band rule the Japanese airwaves (rather than all the mediocre musicians that actually do)?

It was also one of those shows that partly answered the question, where do girls in Tokyo go on weekend nights? I can say that about 150 of them came to Shimokitazawa to watch a rock show at the Que. The audience was, no exaggeration, about 95% female. 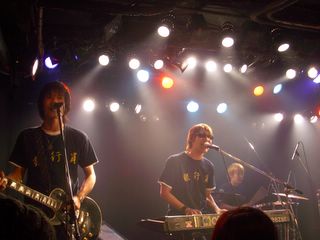 I think many of those girls had come to see the Bank$’s and its singer, keyboard and manic stage orator, Yuhi Komiyama. A tall guy who always wears sunglasses during shows, Komiyama is one of those musicians who people might pay just to listen to talk, which he does a lot of, seemingly about whatever subject enters his head. But he’s also a great live musician who always gets the crowd going (many of the girls in the audience were hopping during Bank$’s more upbeat songs). In truth, a night like tonight featuring the Bank$ and Plectrum is a rare treat, because those two are two of the best live bands in Tokyo.

As I listened electrified, I thought about what formula, if any, creates a live band that is exceptional like these two group. Being outstanding musicians is one requirement. And having good songs. Also, being passionate. And having lots of experience. But there’s some unexplainable extra quality that seems to make the difference between being just a good band and being a band that makes people want to see you over and over. Whatever it is, Plectrum and Bank$ have it. If you are reading this and you live in Japan, please do try to catch these two bands. You won’t be disappointed.