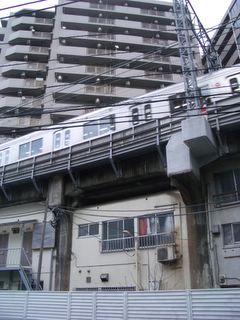 In a hideous fake brown brick building in Shibuya is Apple Crumble Record, a record shop that is loved by Tokyo guitar pop fans despite its tiny size. Miniskirt singer Edgar Franz, for example, calls it his favorite record store in the city. I went there for the first time a couple of weeks ago.

It's a brightly-colored closet of a store, carrying CDs and records from pop musicians from Europe, Japan, and other parts of Asia. But I didn't realize how cool the store really is until I looked up their website, and found a column of theirs called Indie Pop Noodle.

Aimed at introducing indie pop bands from the rest of Asia -- Hong Kong, Indonesia, Thailand, the Philippines, Taiwan, Korea -- the column describes in detail interesting-sounding overseas bands I otherwise would know nothing about. The author had already written 19 installments of the column (unfortunately for non-Japanese speakers, they are all in Japanese).

"It's toy pop where all the songs have music that sounds cheap like it was made on Casiotones, but the melody is simple yet pop and easy to remember and just so great, and it's like a proof that whether it's just three chords a good song is good," the author writes about Pancakes' music [my translation].

The column says the Pancakes has one song in which the girl plays the A chord over and over again but it's supposed to be a nice song, which I'll have to listen to believe. The review made me want to sample some of the Pancakes' musical treats -- I predict an Apple Crumble visit coming up soon in my schedule.

What's so wonderful about Apple Crumble and its Indie Noodle Pop column is that I get the sense the people at the store want the same thing that I do: good music by local artists, whether in Japan or elsewhere. That may sound simple, but it's not that easy to find -- there's music everywhere, but it's often not that great, or if it is good, it's the same thing people all over the place are listening to.

CHANGE OF SUBJECT: Just found out from advantage Lucy's Internet page that the band is doing two shows in two weeks in March! First one will be on Sunday, March 13 at the Que in Shimokitazawa, and the next show will be at the Shibuya Cyclone on Saturday, March 19. Lucy has been good about performing live throughout the year, but the pace was still only about once a month. The recent increased frequency probably means they are gearing up for the release of their very long-awaited new album. It's good news, and I'm waiting eagerly for these shows, and so should you if you are in the Tokyo metropolitan area or are planning a trip here - Lucy fans unite!

Lastly, about the photo above that has nothing to do with Apple Crumble Record, except that it shows a row of apartments that are on the way from my house to Shibuya, where the record store is: I called them the most pathetic apartments in Tokyo, because they are. These apartments are literally built directly below the train tracks (or maybe the train tracks were built over them?), and they are old buildings, meaning the apartments must shake all day whenever a train passes (the trains stop running around midnight). Many questions: Who lives in the apartments? Don't they go crazy? Why are the apartments there? Did the apartment owners just not want to move after the train track plans were made? Are the rents dirt-cheap? Boggles the mind.
Posted by Ken M - Japan Live at 6:15 AM